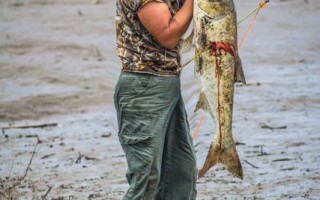 It seems like we’ve been bowfishing for the invasive carp a long time now – even though to many in the outdoor world bowfishing is a seemingly new and trendy sport.

For those of us that are river rats – it’s not a sport.

There are many reason why we bowfish, but perhaps the most important for so many of  us is as a conservation effort.

Government agencies have invested millions engineering and trying to design systems to stop the invasive carp.

Ultimately though, the government and the bowfishers have a mutual goal. Win the Carp War.

Recently in a press release  The U.S. Army Corps of Engineers (USACE) announced that the  Chicago District awarded a contract in the amount of $2.8 million July 31, 2013, to E.P. Doyle & Son LLC for construction of water structures as part of a new electric barrier in the Chicago Sanitary and Ship Canal (CSSC) in Romeoville, Ill. Laboratory and tagged-fish results show that the electric barriers are an effective fish deterrent.

As of spring 2013, individually-coded transmitters have been surgically implanted into approximately 238 fish of all sizes in the Chicago Area Waterway System. There have been nearly 6 million detections of these fish, and no tagged fish have crossed the barriers in the upstream direction. No Asian carp have been captured or observed above the barriers in the last two years. Currently, the adult population front of Asian carp is about 55 miles from Lake Michigan and has not moved for several years. The electric barriers are approximately 37 miles from Lake Michigan.

Years ago we tried to tell the powers that be that these carp were destroying our waters, wetlands and marshes. Now the entire Midwest and Great Lakes region are realizing that we are at war.

For years bowfishing was considered by many in the outdoor and archery worlds a rather primitive, backwoods, redneck kind of thing. There weren’t many tournaments, guides, teams and pro bowfishers. Since the early 1990’s it has evolved into sport enjoyed by many as a way to keep archery skills intact during the hunting off season.

The Bowfishng Association of America tells us on it’s web site:

“The BAA has been around since 1990 and was originally started as a way to keep track of bowfishing tournaments in the United States. Since then the sport of bowfishing has evolved and the BAA has evolved with it. Since the advent of the internet the need to keep track of tournaments around the country is no longer an issue, this is easily done via websites and bowfishing community sites. Instead the BAA has shifted its focus to helping bowfishermen fight for their rights to bowfish as well as working closely with biologist and DNR to help reduce the spread of invasive fish species around the country.

Although bowfishing will never completely eradicate these invasive species, it is a proven method to help keep their numbers in check and in some instances, drastically reduce them. All the while bringing much needed money to local economies.”

I am a warrior in the war on carp.  I spot and stalk from the banks and edges of the marshes and rivers, I shoot from  a boat, I don waders and walk out into the sloughs. All in an effort to shoot as many of these invasive fish as I possibly can.  People have expressed to me that they are appalled by the sheer numbers we take, they have called me bloodthirsty, barbaric, and even less flattering things.

Surely, they cry, if bowfishers continue, they will eradicate the species.

God I hope so.

In a sense, I suppose I am little bloodthirsty. These invasive carp have destroyed the native fisheries; they are destroying marshes and wet lands.

They have invaded the waters that I love and it is indeed a  war. The rivers and wetlands that I have been slogging through my entire life, that once teemed with fish, game, waterfowl are barren mud flats and stump patches.

We river rats are damned protective of our waters.

The carp have pissed us off.

Like all things in the river, the marshes, the swamps and backwaters,  bowfishing is messy, muddy, bloody, and smelly. There are times it borders on brutal.

But the carp have pissed us off.

Don’t forget you can read more articles from Gretchen Steele’s blog “Wild Woman’s Wanderings” here and don’t forget to like us on Facebook.