Snow Goose conservation season offers waterfowl hunters a way to extend their season.  Also known as “light geese” snows have become so incredibly prolific that they are quite literally eating themselves out of house and home, along with causing serious damage to the ecosystems that support them. 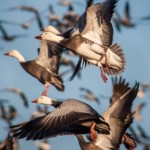 Spring conservation season is just one effort to save the tundra breeding grounds, and surrounding ecosystems. During spring snow goose season most “normal” waterfowl regulations are suspended. It’s pretty much thought of as free for all in some areas. Hunters are free to unplug shotguns and use electronic calls that play actual recordings of live birds, and there are no bag or possession limits.

But despite the huge numbers of birds encountered and the lifting of regulations, spring snow geese/light geese can be difficult bird to bag. Snow geese are smart, and with upwards of tens of thousands of birds in a single flock, that makes for a whole lot of eyes on the lookout for anything potentially suspicious or harmful on the ground. 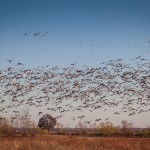 Visions of piles of geese at the end of the day often lead hunters to believe the spring conservation season is a no brainer shooting spree and all one has to do is show up for the party. The bad news – it’s not. The good news – it’s a fun, fast and furious way to extend your waterfowl hunting season.

“They’re overpopulated for a reason; they’re smart, tough birds. These birds are hunted almost two thirds of the year. It doesn’t take them long to catch on to any trick we have in our bags,” said Jason Schlesinger, who guides southern Illinois snow goose hunters at Gander Hill Goose Club, and Pro Staff for Lucky Duck and Rig ‘Em Right.

To make the most of a spring snow goose hunt, Schlesinger suggested keeping these tips in mind as you head to the field.

Scout, scout, and scout some more. Snow geese are constantly on the move. Start your scouting by driving the back roads to locate fields where snow geese are feeding. Figuring out how and where the snow geese are feeding and how they are moving through an area is one of the keys to success. It  should go without saying that obtaining landowner permission should be your first step, but this occasionally forgotten in the excitement of finding tens of thousands of light geese feeding. If the decoys can be set by mid-afternoon, you can often hunt the field that evening and again the next morning.

“Probably the longest hunt I’ve had in one field with feeding snows is a four day run.” Said Schlesinger. “In general it’s just a couple of evening hunts and one morning hunt  and they are on to us and we are back to looking for the next field.” 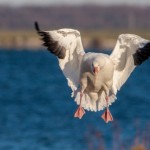 Concealment is paramount when hunting snows geese.  When you have upwards of 10,000 pairs of educated eyes in a single flock inspecting the field for any danger signs, there’s no room for error in concealing yourself.  Setup your layout blind in the decoys and make the profile as low as possible. If the ground is soft and landowner is agreeable, go so far as to dig down a bit to make the profile even lower. Look for natural low areas in the field; waterways, ditch lines etc. Set all blinds as close together as possible, and fill in all spaces between each blind with plenty of surrounding vegetation.  Do not forget to insure that you face is also concealed either with mesh flaps on the layout blind, face paint, or a face mask. Nothing will flare a group a snows faster than a shiny white face peering up at them.

The more the merrier or not? According to Schlesinger, the number of decoys and their placement varies greatly between feeding flocks and migrates. Schlesinger offers the following explanation; “When you are trying to pull in the huge migrating numbers and entice them to stay in the neighborhood for a while resting and feeding definitely it’s a 500 – 1500 decoy spread. Full bodies, rags, you name it. If you’ve got it – put it out.”

But it’s different when snagging the field hopping feeders that often are found leaving refuges and rest areas each day to feed. A huge decoy spread can be counterproductive. Flocks may view the field as occupied and hop over to next available food source. For feeders, Schlesinger recommends an average of 4 dozen snow/light goose decoys, with a few Canada and Speck decoys mixed in, set together in relatively tight small group. Adding a few notion decoys is also helpful to bring in the field feeders.

The gloves are off during conservation season and e calling is not only allowed it can be a vital part of the hunt, or it can spook them right into the next county. As with decoy placement differing between feeders and migrates so do calling tactics. For migrates – bring out the sound system that will rival any DJ’s.  Many successful snow goose hunters use a two player/ four speaker system in order to create the realistic and chaotic sound of a feeding flock. This type of system offers the hunter the ability and flexibility to adjust to the situation at hand. 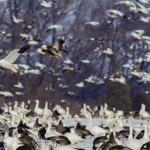 Use one player to put out a constant, lower volume, background sound. If large long distance flocks are noted, increase the volume of the other player to hail them in then decrease it as they approach.

Numerous companies sell snow goose CDs or MP3 files for you to choose from, just insure the quality is clear and realistic-sounding.

Most often what draws waterfowlers to a spring snow goose hunt are the images presented by guides, outfitters, and many a magazine or website showing pile after pile of snows mounded up at the end of a great day. The truth is those huge harvest numbers really are not an everyday occurrence in the spring fields. Do those days happen – of course they do, but are prepared for a smaller harvest of birds. Have realistic expectations and just enjoy the fact that the snow goose conservation season enables to extend the amount of days you are able to spend in the field with a good dog, good friends, and knocking birds down.

“People need to understand they aren’t going to kill 100 birds every day, there’s a lot of work to a successful snow goose hunt. No matter how skilled you are – it’s important to be realistic about these educated and wary birds. They learn fast, spook easily, and no one is going to consistently have 100 bird days.  Absolutely none of us get it every day.” said Schlesinger.