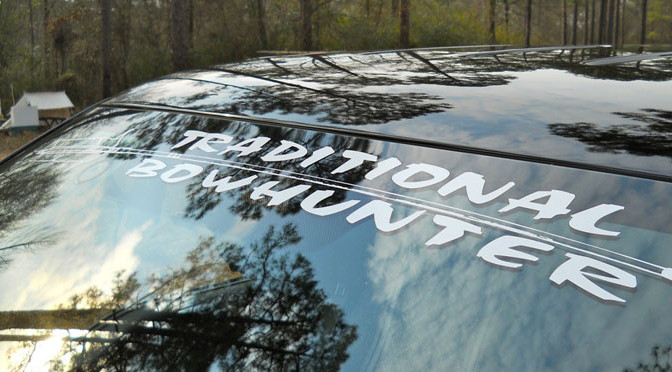 Now that you are interested in hunting with a traditional bow, it is time to consider draw weight and the absence of let-off, which I feel is the compound’s greatest advantage. Traditional bows do not assist you once fully drawn. Holding an 80lb longbow at full draw is monumentally tougher than an 80lb compound with let-off, which makes choosing a bow with the correct draw weight absolutely crucial, especially when you are making the transition.

Choosing a bow with the correct draw weight would be easy save for the subjective nature of it and the variations of advice one receives when posing the question. Debates over draw weight have raged for years and I don’t see them concluding any time soon. The traditional world is basically split into two camps: the “my 45lb bow will kill anything on the continent with a well tuned arrow and proper shot placement” camp, and the “shoot the heaviest bow you can handle should something go wrong” camp. The two do not get along and I have a hard time disagreeing with the logic behind either of them. It would benefit you to be aware of this riff and explore the ideologies behind each before making your decision.

I’ll get you started by asking you to consider the following.

A common misconception made by bow hunters in transition is to drop 20lb from their compound and hit the woods with a bow that is too heavy. Bad habits, missed deer, and injury can result. Most cannot transition from an 85lb compound into a 65lb stickbow. They are worlds apart. The weight of a traditional bow is bore by the back, shoulders, and fingers sans assistance. Consider the latter in particular. Most compounders shoot with a release. They aren’t bearing the weight on their digits. A thin bowstring can be murder on the fingers, especially when one isn’t used to it. A 45lb recurve ripped my fingers up for weeks while calluses formed.

Draw length must also be considered, which will change slightly from release to fingers depending on your new anchor. A longer draw equals more weight: about 3lbs per inch of draw. A shorter draw equals less weight. I usually recommend a 45-50lb bow to newbies who ask and yes with the proper arrow and broadhead you can hunt with this weight. People have been doing it for decades and will continue to do so.

Being big and strong doesn’t always transition to big draw weight. I’ve seen the opposite too many times to think otherwise. At 6’4” 240lb, I’m a fairly large guy and have fondled a 50lb the bulk of my longbow career. I only recently jumped to 65lb and had to go through a transitional period to do so. On the other hand, I have several friends who shoot bows in the 80lb ballpark and aren’t nearly as large. While it is true that some are naturally stronger in archery-related muscle groups, it takes practice and proper form to increase poundage for most of us mortals. A popular method is to buy a bow at your target weight and slowly work into it by drawing, holding for a short period of time, and letting it back down repeatedly several times a day. The process works your muscles and lets your body adapt to the weight. By the same token, once you’ve achieved said weight, it can be easily lost by dropping back down or simply not shooting for awhile. Muscles need to be maintained to master a target draw weight. I said “target” draw weight for a reason. Before attempting any of this, you need to figure out where you want to be and plan accordingly.

A shoulder to cry on

When I began throwing myself into this whole thing, I believed that a 50lb bow was the optimum bow weight for everyone and anyone shooting anything but was trying to prove something. There is nothing wrong with a 50lb bow. It is an ample killing implement with an arrow that is properly tuned and tipped with a sharp cut-on-contact head. However, as much as I am a proponent of the 50lb bow, I am every bit as a believer in the aforementioned Murphy’s Law and have decided to walk a heavier path. Animals, big game in particular, are tough and they seldom sit still for you. At some point in your traditional journey you will hit one in a less than ideal place. I’ve done it twice already.

The first resulted in a high shoulder hit on a doe that basically laughed at me. She jumped the string, I shot a bit high, and that was that. It was humbling, it was terrible, and I still haven’t gotten completely over it. That particular deer was wounded with a 50# longbow and an aluminum arrow with a 145g broadhead that wasn’t as sharp as it should have been. I was only 10 yards away. Now, what makes this story unique is that I killed another doe moments before with the same setup 10 minutes prior at 25 yards with a double-lung pass-through. In one sitting I experienced the full emotional spectrum of bowhunting and learned plenty about Mr. Murphy.

The second occurred two years later with a 57lb longbow and an arrow setup that weighed almost double the one above. I had the drop on a doe from a ridge overlooking a creek bed, but threw the shot a bit high due to the elevation and caught her on the shoulder. This time the arrow cleaved it in two, buried deep into her spine, and killed her instantly. Had it not been for the heavier bow and arrow I am certain that situation would’ve turned out differently and believe you should hunt with the heaviest bow you can handle. And by handle I mean shoot more than once on a “strong” day when you’re feeling particularly spry.

Whatever campfire you choose to sit at – heavy or light – there is one principle in which you must absolutely abide: hunt with a draw weight you have mastered. Entering the woods with a weight you’re not comfortable drawing is not only a bad decision, but also an unethical one. If you can’t draw and hold your bow for several seconds, repeatedly and on any given day, you have no business taking it to the woods. Doing so is as good as inviting Murphy’s Law to have its way with you. Anything that can go wrong, most definitely will at some point or another. The mystique of traditional is the unpredictability of the animal and the circumstance. Every opportunity is a blessing and blowing one is a terrible feeling.

Once you’ve considered the above, completed some research of your own, and chosen a hunting bow that works for you, your next step will be finding something that shoots well out of it and does what you need it to do when it hits the target. A good arrow with the right cut-on-contact broadhead is paramount to your success with a traditional bow, regardless of the poundage. This is something we can all agree on.

We’ll talk about hunting arrows next month. You won’t want to miss it!

12 thoughts on “Weight a Minute: A Look at Traditional Draw Weight”