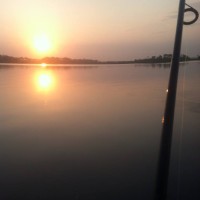 I arrived at my launch point, a small bridge located on a road aptly named, “Unknown Road” at the upswing of the tide. My fishing buddies, having arrived ahead of me, were busy capturing bait and, in general, preparing for the short kayak trip via Cow Creek to the Gulf and Pepperfish Keys.

This was my first trip to Pepperfish. Many of my fellow fishing enthusiasts had spoken favorably of the location and had touted its prolific trout population. On more than one occasion, I heard the statement “The trout practically jump in the boat, Fay!” Well, we shall see….

Cow Creek was, as promised, lovely to see.  The creek wove its way through the saw grass in sultry lazy curves to the Gulf. An hour before high tide, the water was still calm and clear with a sandy bottom to easily navigate. I paddled my Hobiecat toward the incoming tide and Pepperfish – an easy 15 minute push to the confluence of the creek and the gulf.

A tremendous advantage to the kayak is its maneuverability. While the power and distance the kayak can travel is limited by the stamina of its user, they require no fuel, and can easily navigate areas where propeller driven boats are forbidden.  As a result, the kayak has become the inshore angler’s best friend when seeking out fish trapped in pockets at the swing of low tide.

I arrived at the Gulf just as the sun was rising over the creek. At the first touch of the sun, I turned my kayak to watch the electric current of life pulse over the water.   Mullet began to leap, while schools of bait boiled and rolled with the current. I once asked my dad why mullet jumped at the break of dawn. He said he didn’t know but he suspected it was just because they could. While there is a scientific explanation for why they do jump, I think I much prefer my dad’s simplistic answer to life’s questions. We do things, because we can.

While my companions pushed across the bay to Pepperfish keys and the “Trout superhighway”, I stayed close to Cow Creek where grass beds grew in patches on the sandy bottom. To prepare for the trip, I had made a quick stop to the local Farm and Lumber Store to fortify my tackle box with new jigheads, a Cajun Thunder popper, and a few Gulp artificial shrimp baits. I hoped my choice of baits improved my odds at catching the elusive trout – that beautiful green and gold speckled wonder that I imagined was stretching and yawning beneath my Hobiecat, whilst waiting for the sun to mark the beginning of the days struggle for life.

At first cast of my line, I began to get strong bites and as the sun began to rise above the low tree line, I caught my first trout of the day. Unfortunately, its size negated my keeping it and in truth I had not brought a cooler along so “catch and release” was the order of the day, regardless of size.

While I was having pretty good luck with my artificial baits, I do prefer the use of live baits. Using my extra pole, I tossed in a fiddler crab to troll behind me just to see if there was an interest. As the morning progressed, I continued to get bites but it wasn’t until my fishing buddy Tim powered toward me through the waves and the wind on his Tarpon 160 kayak that things became a little more interesting. Hailing from the Davis clan, Tim also shared a lifelong passion for fishing. When I heard that he had purchased a kayak and was planning a trip to Pepperfish, I knew I had to come along to celebrate his maiden voyage.

He and his cousin Kevin had spent the morning fishing the channel (aka: Trout Superhighway) between Pepperfish keys and as luck would have it, Tim reeled in 3 legal size trout (15”, 17”, and 19”). To my surprise, he released them. As we rolled in the waves and the increasing wind, I asked him, why? He stated that, with any trip, “something” always gets left on the kitchen counter.  His “something” was a cooler. Now, what are the odds that all three of us could not remember to bring a cooler? This ranked right up there with dropping an ice cream cone on the sidewalk moments after the purchase.

In any case, I did believe his explanation for empty hands (after all, I had done the same thing) and so my faith in his achievement was rewarded with the secret to his success. In short, the channel is the place to be. There is plenty of sandy bottom punctuated with grass beds the trout absolutely love. Tim caught his keepers using a Cajun Thunder popper, with white Gulp artificial baits on a ¼ oz hot pink jighead. Tim also used monofilament line chased with Power Pro braided line on a medium weight rod.

If you head to Pepperfish, be sure to bring an anchor. As with any coast, the tide drives the activities of the fisherman. In the kayaker’s case, drifting can become problematic when trying to navigate and cast at the same time.

Overall, it was a successful day. We paddled back to the launch about 2 hours before low tide to ensure a smooth return trip. If I had a high point trophy to give, it would have to go to Tim. While I was able to discover a new fishing hole, Tim was able to catch the most fish, and launch his brand new kayak without mishap. As for sharks, well no one was eaten or stalked (unlike my other fishing buddy, Earl – More on this little incident later).

In closing, I hope you enjoyed my BLOG. In the near future, I plan to introduce related discussions on Cedar Key – Discovering the local fishing holes; How to catch, prepare, and cook stingray, and how to catch a shark without becoming dinner yourself. Please follow my BLOG as I share my adventures and favorite pastimes with you!

Don’t forget you can read more articles from Fay Walker’s blog “Fay-vorite Pastimes” here and don’t forget to like us on Facebook.