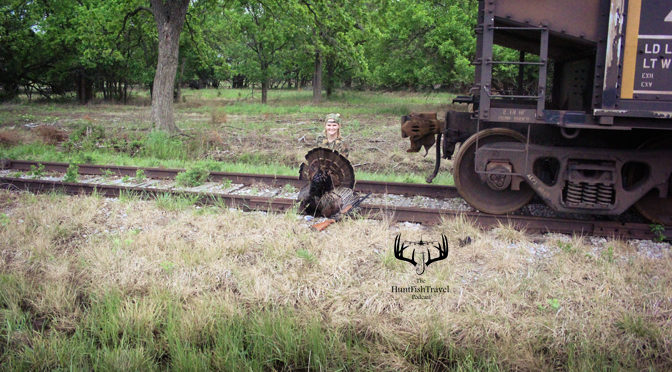 Since I didn’t get a turkey this year I thought I’d share the story of my all time favorite turkey hunt. I originally posted a shortened version on the Kansas Travel Blog “My Kansas Turkey Hunt: The Belly Crawl and The Train“.

It was a media event hosted by the Association of Great Lakes Outdoor Writers in Parson, Kansas.

We’d drawn a permit to hunt the Grand Osage Wildlife Area,  which used to be part of the Kansas Army Ammunition Plant. It was interesting to see the abandoned train cars and defunct munition factories.

The plant produced ammunition during World War II, the Korean War, and the Vietnam War. In the 1950’s the plant reworked 105mm cartridge cases. made bombs, artillery ammunition, and component parts.

And while I didn’t venture into any of the hollowed out buildings, you could still feel the ghosts of wars long past.

It was a great time with a lot of great people. My dear friend Trent Marsh and I hunted hard for the two days we were allotted and were not able to get it done.

Even still one of my favorite memories is of Trent and I racing across an old testing field, hoping there weren’t any missed live ordinances buried beneath our feet. We both collapsed into uncontrollable laughter when we realized the irony of the situation – since we were running at top speed holding loaded weapons. I haven’t laughed that hard since.

We hunted hard but weather threw us for a loop, we thought we had a chance the second morning, a lone Tom was trying to brave the torrential downpour, but the rain proved to be too much for him.

My flight left late on Friday so I took advantage of the morning to see if I could pull off a Hail Mary.

Friday morning dawned early.  We’d put the birds to bed the night before on the Grand Osage Wildlife Area in Parson’s, Kansas so I knew right where they’d be.

The lady at the security booth checked my pass and was amused when she realized I was alone this morning, she wished me luck and told me she’d cross her fingers for me.

I hurried to the designated area, parked and grabbed out only the essentials.  Phone, gun, two shells, turkey call and my seat to sit on in the wet grass.

I hurried across the field as the sky lightened at an alarming rate.  Halfway there I heard the first gobble.  Cursing under my breath I picked up the pace and using a large swath of tall grass as cover, I hunkered down and crab walked into position.

I waited patiently, seated in the tall grass, waiting for them to take the Turkey Super Highway they’d been traveling the last two days.

My heart lept into my throat and I flipped off the safety as I heard the first telltale thuds of the turkeys flying down from their roost tree, the boss hens chirping like mad to keep her flock together.

The past two mornings they’d hit the ground and used the section between the tree line and the swatch of grass in which I was sitting as a travel path.  I hunkered down even lower and waited patiently for my opportunity.

One possum, two raccoons and a coyote later, I realized the turkeys had decided that today they’d take a different route.  I knew if they busted me it really would be over, I wouldn’t have enough time to regroup and set up on a different flock.  Taking that chance I left everything but my gun sitting in the grass.  Crouched low I gingerly stepped out and neared the roost tree.  The turkeys were nowhere to be found.

Straining my ears I was met with silence. I stood up straight and let out a deep sigh.

A flicker of movement out of the corner of my eye caused me to freeze.  I slowly turned my head towards the abandoned train cars scattered all over the old Army Ammunition Plant.

I strained my eyes in the early morning light – YES! There it was again! The unmistakable bobble of a turkey walking in the field on the other side of the train cars.  I could just barely see them through the gaps in two of the cars, and I knew if I could see them, they could definitely see me.  I eased my foot over and slowly stepped out of their line of site.

Heart thudding I ran towards the train cars and peeked through the gap.  There they were; a flock of them.  Five or six toms strutting together, fans glowing in the warm morning sun, trying desperately to convince one of the twelve to fifteen hens that they were the most beautiful.

I quickly assessed the situation.  They were at least four hundred yards away, moving slowly but steadily towards the far corner of the field.  There was no way I’d be able to belly crawl that far across that flat field with two dozen eyes on me and not get busted.  Thick trees hid the road from view and I thought, using them as cover I might be able to get ahead of them and cut them off at the pass. 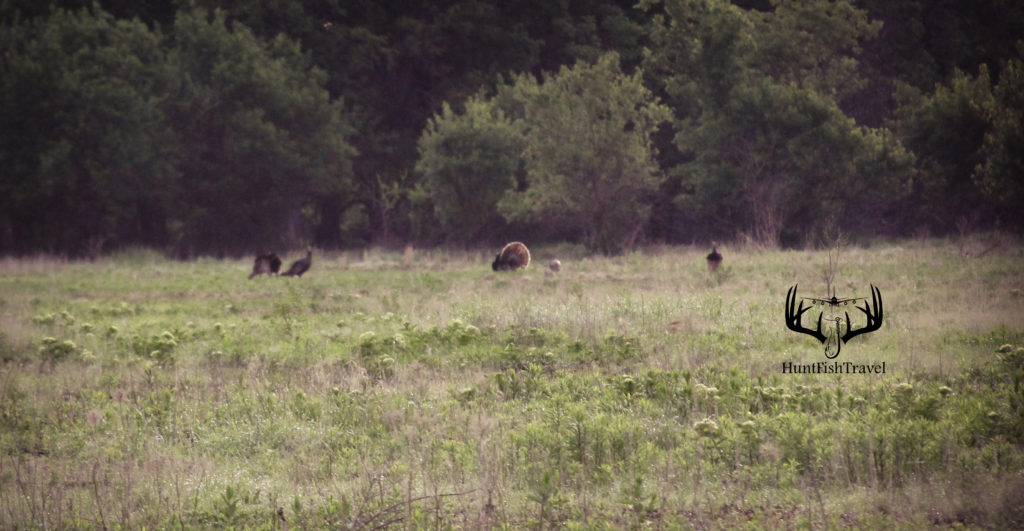 Mind made up, I raced towards the end of the train cars, crossed over the tracks and into the trees.  I crouched low and moved as stealthily as I could, I decided to see where they were in relation to my position.  I paused and peeked out around a tree.  That’s all it took.  All fans folded down and that flock of turkeys turned into a flock of roadrunners.  They went racing back the way they came towards the head of the train cars. 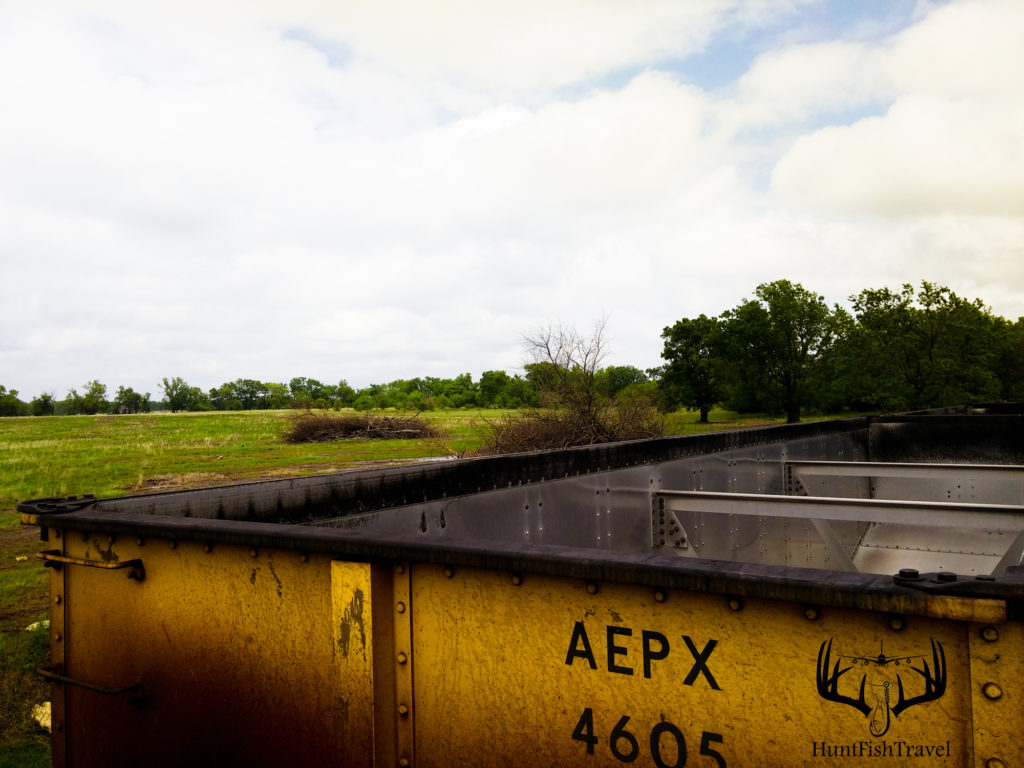 “No, no, no, no!” I muttered turning back and racing back the way I came – back to the end of the train to try and circle around and cut them off at the other pass.

I realized I hadn’t see them cross the railroad tracks into my field and about two thirds of the way along the train cars I paused, heart thundering in my ears; I couldn’t get a read on where the turkeys were.

Praying I wasn’t making yet another tactical error, I sidled up to the nearest car and peeked around and through the train car gap: AND THEY WERE RIGHT THERE!!

There was a large tree they’d stopped beneath, the hens were milling about, pecking and scratching at the ground and the toms were fanned out in all their glory.

I jerked my head back before they could see my eyes, if I’d kept running they would’ve seen the movement in the train car gap and I would’ve blown them out of yet another area.

I took a minute to figure it out.

I had one of two options, I could climb up onto the top of the train and shoot from above or I could belly crawl under the train and try to sneak up to them using the ditch as cover.

I chose to belly crawl.

Every six inches or so a head (or three) would pop up over the rise to inspect this odd camouflaged creature making its way towards them at a snail’s pace.  They obviously knew I was there, but they didn’t know what I was and weren’t convinced I was a threat.

I finally inched myself close enough, soaked to the bone, covered in bugs and dirt I was flat against the side of the ditch and they were just over the rise.  Head down, I eased myself forward, snaking my gun through the grass and dirt until I could shoulder it.

I lifted my body just enough so the barrel could clear the dirt, aimed at the boss Tom and pulled the trigger.

And just like that my 2015 Kansas turkey hunt came to an end in a burst of feathers.  A fully mature tom with a ten inch beard fell to a sneaky girl from Wisconsin.

It was one of my most memorable hunts and I can’t wait to go back.

Listen in to hear an in depth audio version of this story: