And to a gal that’s an admitted archery snob, a gun really, really has to stand out to grab my attention.  I do love my hunting rifles and my S&W pistol but I don’t own any guns that get me all gooey inside.

So as I’m wandering up and down the 12.5 miles of aisles in the SandsExpoConvention   Center, I really scrutinized the products, looking for the few I knew would stand out among the rest. 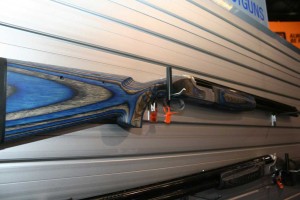 To be completely honest, I’d never heard of FNH USA.  As I walked past their super huge booth, I merely glanced over their pistols and rifles.

And then I saw the most beautiful gun I’d ever seen.  The singing of Angels rang through my head and the world slowed to a mere crawl. 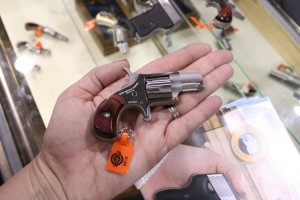 These have got to be the cutest functioning midget guns ever.  They were just so cool simply because of their novelty.

You can fit one of their .22 Shorts in your tee shirt pocket.

I was impressed with the overall quality of the mini revolvers especially, made of stainless steel they all had very nice finishes and felt weighty in the palm of my hand.  The gun’s lock work had very clean movement and the hammer pulled back smoothly.

While I don’t doubt the functionality of these guns, I think for someone with long slender fingers, it would be a little awkward to shoot.

But they were pretty cool all the same. 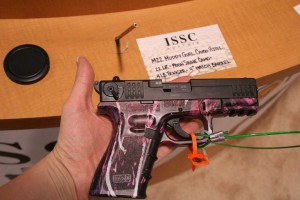 This single-action, 10-shot .22 Long Rifle polymer-framed handgun definitely stood out to me.  While it looks very much like a Glock, the more even grip angle felt easier in my hand, and the finger groove ridges on the front of the grip were nice and my fingers rested comfortably.

The rear site was adjustable for windage and the front site looked very easily removable.

As a huge proponent of safety of course – the slide mounted safety and the trigger safety stood out as obvious safety features.  I did see that if you set the slide safety, it immediately  dropped the hammer.

I’m not a huge fan of pink but the Muddy Girl Camo really wasn’t too obnoxious.  It was a nice accent for a gun a gal like me could wield.

The last thing that stood out to me was while most .22 pistols seem like toy guns, this one felt like a “big girl gun”, it didn’t seem like they just too a throwaway caliber and slapped some pink on it to attract female shooters. 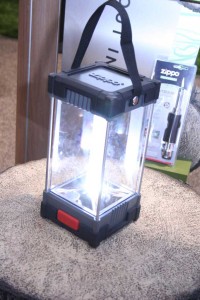 My husband and I camp a lot.  We’re tent campers and prefer rustic to modern campgrounds.  This year I’ll be introducing him to sand bar camping on the Wisconsin River.

We’ve owned propane lanterns and battery operated lanterns and about a million flashlights.  I love the LED lanterns because they don’t give off an odor or smoke and they tend to last a long time.

So when I walked past the Zippo Outdoors booth their new researchable Rugged Lantern caught my eye. Apparently you can drop it, soak it toss it and generally abuse it – and it will still work.

Krissie was kind enough to demonstrate by tossing the lantern up into the air and allowing it to tumble (and bounce) on the ground! And then she tried to drown it.

The rubber corners and water tight construction stubbornly stood up to her endeavors.

It had three brightness adjustments and even had a setting in which the lantern would blink S-O-S.

Talk about a survivalists dream!

There were a lot of scope manufacturers at SHOT Show but the redesigned Hawke Sport Endurance scopes stood out among the rest.

They were light in my hand and when I looked through them I was impressed with the distance and clarity.

The new Endurance line was created to cater to the long distance shooter and the yardages were etched directly onto the reticle field – brilliant!!

All in all there were lots of really great products at the 2014 SHOT Show, these were my favorites.  We’ll see what next year brings!