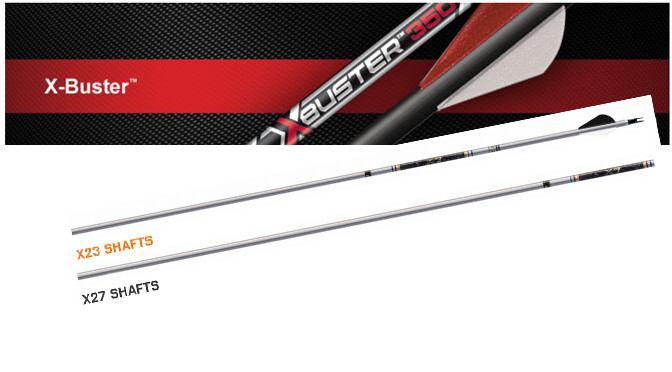 Paper Target archers are sometimes stuck between two masters – the NFAA and World Archery.  The NFAA doesn’t have an arrow restriction.  If you can fling it, it’s 27/64″ in diameter, and someone produced it – you can shoot it.  World Archery, on the other hand, has a restriction on maximum arrow diameters – which is 9.3 millimeters (or 23/64″) in diameter.

Further compounding things for some archers is a little nagging issue called arrow spine.  Arrow spine has this funny effect on your shot – if you arrow is too stiff, your arrow will shoot, but any form imperfection will cause you poor arrow flight.  If your arrow is too weak, you get erratic arrow flight and no consistency in your shot.

In today’s review, we will look at a large diameter arrow for lighter poundage shooters, and also look at the new Easton X2 (X27 and X23) aluminum target arrows.

Then, Carbon Express came into the picture with a 700 and 600 spined target arrow that was larger than normal diameter compared to other arrows in a similar spine – running 21/64″.  Called the X-Buster, this all carbon arrow was originally introduced in Europe, then was finally released to United States based archers about a year ago.

I picked up a dozen of these arrows 11 months ago, and have been using my son as a test subject for these arrows, having him use the arrows as his primary indoor arrow.

Overall, the arrow is pretty much your standard carbon fiber based arrow.  The arrows (if they are spines other than the 600 and 700 spined arrows) can accept an insert using a screw in point, otherwise the arrows take a parabolic or target glue in point.

Nocks are relegated to a pin nock for the 600 and 700 spined arrows, or a nock bushing using the CXL arrows can be used for the higher spined arrows.

Straightness is one of two complaints about these arrows, at least in the lower spine range.  Straightness is supposed to be 0.0025″.  A sampling of the test arrows revealed that straighness was far worse.  According to a dial gauge and a Pine Ridge arrow spinner, four arrows had 0.03″ runout in the center of the arrow, and two arrows had 0.06 runout at the ends.

The arrows that required trimming on the ends ended up well within straightness tolerances once a half inch were removed on each end.  The 4 arrows that had poor runout in the center were not used for competition purposes and were used for practice arrows only.

The other complaint about the arrows are the nock pins.  The nock pins are set with really soft metal, allowing them to deform while saving the arrow shaft.  Unfortunately, the soft metal also means that the nock pin also deforms over time by merely replacing the nock, forcing the user to replace the nock pin and nock together in some cases.  In an emergency, a nock pin straightner (like the one sold by Zenith Archery Products) can be used to repair a bent nock pin.

Performance of the arrow is outstanding, especially when paired with feathers.  Professionals like Dietmar Trillus used the X-Buster at the World Archery Festival in Las Vegas in 2014, and the X-Buster in 2014 was used to break an indoor national record that was held since 2008.  Durability of the arrow is excellent, and as long as you have enough nock pin components with you, the arrow would perform in a tough 3D environment as well.

It’s recommended to pair the arrow with Easton G Pin Nocks or with Beiter Pin Nocks for the ultimate durable configuration.

Next up – the Easton X2 series of aluminum arrows.

Frankly, there’s two major reasons why the X2 series exists.  One – it’s got a smoother finish than the X7 Eclipse – making it feel like it’s a nicer shooting arrow.  The second reason?   It’s really for statistical tracking.

Enter Easton’s marketing department.  With the demise of the Cobalt X7 series (which was a blue anodized arrow), Easton had no way of determining (at a distance) who’s shooting their arrows for indoors.

The X2 series can be easily seen and identified as an Easton arrow.

But, marketing issues aside – the arrow shoots absolutely wonderful.  When set up with a proper configuration, these arrows fly straight and true.  The new silver anodize coating provides easy visibility downrange, and has far less noise against the blade when using a standard width BEST blade.

Construction of the arrow uses the same 7178-T9 aluminum as the Eclipse X7 arrows, and as mentioned earlier, uses the same components.

Testing was done using an X23 2312 arrow, with 100 grain points, and 4″ Gateway feathers.  Tuning was a breeze – there was very little adjustment needed on the BriteSite blade rest, and it’s able to shoot lights out once you get it tuned.

And – the picture shown below definitely proves the marketing point – you’re able to tell the difference between the X7 Eclipse (in black) versus the new X2 series arrows (in silver).  It was extremely easy to see who was shooting X2’s at the Arizona State NFAA Indoor Championships this year.

So, if you’re used to shooting Easton aluminum arrows, you can’t go wrong with the X2 series – if only to help people out on what type of arrow you shoot.