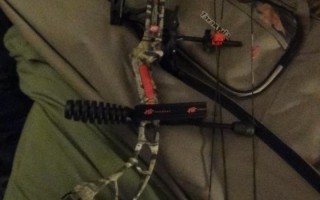 It seems as if it was 100 years ago when I had to ask myself that very important question. What do I really need to start bow hunting? I hope that with writing this article, I do not lose any future sponsorship. I am not out to knock any companies out there, just helping the person new to our game. Well, if you decide to take in some of the fine outdoors programming, on one of the numerous channels dedicated to the outdoors sports, here would be what you would conclude to need.

First of your entire bow; to effectively kill the deer of a lifetime you will have to by this brand new top of the line bow. It shoots almost 400f/s, weighs about a pound, and costs over $1200 without sights and rest! Then of course the sights you have to use to shoot straight and the rest to hold the arrow will cost you another $300. Did I forget to mention a stabilizer and anti-vibration hardware?

OK you have your bow set up in hand. It cost you your first born and three full paychecks, (sorry landlord) but you got it, just what the tv celebs told you to buy. Now on to camo. It seems every camo clothing company out there is trying to put as many gimmicks, bells, and whistles they can possibly put on a shirt. Waterproof, windproof, breathable, odor eliminating, invisibility cloaks, capes woven with the wool of sheep from the planet Krypton. Well you get the point. With so much out there, how can we possibly know what we really need? Let’s watch some television again. Well they say we need this total package that includes 5 different layers of clothes all sew from this scent destroying fabric. Total cost for the package? About $500. Oh yeah plus that $300 you paid for the best boots ever created.

Ok so now you are up to about $3000 and you have not even hunted yet? Did you still want to buy a tree stand? GPS? How about arrows and broad heads? Oh yeah and then there is a plethora of calls and other little things that everyone on television brings with them in the stand. Take all these thoughts; write them all down on a piece of paper, maybe a couple pieces there is a lot of stuff to write down. Now take that paper, crumble it up into a little ball and throw it into the garbage. The real question is: what do I NEED to start out bow hunting?

First I will start out with the most important part, the bow. Yes it would be awesome to get that new, awesome bow that you seen on television. You can not argue with its accuracy, and ease of use. You have to wonder though, what did archers use before all these new fangled compound bows came along? Traditional archers are still around and shooting deer with stick and string. I am a firm believer in the saying, “It is not the bow, it is the archer”. 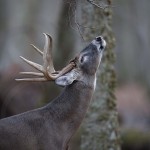 When I first started bow hunting when I was 14 years old, I bought a Jennings bow for $50. It was already at that point about as old as I was. I think the arrow speed hovered around 150fps, a lot slower than modern compounds. I can remember one time taking a 20yd shot. The arrow hit its mark on a doe perfectly, only problem was after shooting, the deer had time to spin a complete 180 degrees and the arrow found its mark on the opposite side of the deer! Yes the bow was slow. No it did not have 75% let off, and no it did not cost me $900. But the one thing it did do was kill deer. I killed more deer archery hunting with that bow than any other. Remember it is not the bow it is the archer!

I used it for better than 12 years before upgrading to a Golden Eagle that I paid $100 for. I bought my first brand new bow just last year. I know shoot a PSE Stinger 3G, which is one of PSE’s lower cost units. I paid about $400 for it. The one advantage to those high end bows is distance. I would have never thought about a 40-50 yard shot with my old Jennings bow like I would with my PSE, but then again I do not think, in the Wisconsin woods, I would take that shot regardless. To me the point of archery hunting is getting them in close anyway. Western hunting is a different ball game all together. It is a serious advantage out west to be able to take those long shots, where “close” may be considered 50- 75 yards. So with these thoughts in mind, find a bow you are comfortable shooting, and that fits you, and how you will be hunting, without over paying. There is no need for your first bow to cost $1000 with no accessories. But if you can afford it, feel free.

Next on the discussion is camo.

Now, if you watch a lot of outdoors television these days, everyone seems to have their own signature line of camo clothing. Sure it would be great to get that Scentlock Dream Season full suit, but who has $400 to dump on clothing these days. Sure they do exactly what is advertised on scent control and keeping you warm and dry. But value for the money? I am not convinced. As much as I hate to say it, I do most of my camo shopping each year at Walmart. They carry the same Mossy Oak and Realtree camo lines you are used to seeing in the expensive lines, but you can deck yourself out in head to toe camo for less than $100. As long as you practice proper scent control through storage and washing with scent destroying soaps, and keeping wind direction in mind, I have not noticed a difference between the expensive clothes and the cheap stuff. Sure the expensive lines may be more durable, and last you a few more years. The high end clothing line may last you 10 years, depending on how hard you are on it of course. The cheaper lines may last you 3-4 years. But do the math now, if the suit you paid $100 lasts you 4 years then in 10 years you will have bought 2, maybe 3 of the suits, and that is a real stretch because for me, and I hunt hard, they last longer than that. Total cost maybe $300 worth of camo compared to the $400 you spent on the expensive stuff that last the same amount of time. So when you are first starting out, keep that in mind. Sure those extras are nice to have, but most of the time fairly unnecessary.

The one thing not to go chincey on is the boots. Boots can be the most valuable piece of equipment you bring with you into the woods. There is nothing that can ruin a hunt quicker than cold, wet feet. Find out the terrain of the area you will be hunting. If you hunt wet swamps then you will want tall rubber boots. If the swamp you hunt is in northern climates such as here in Wisconsin or farther north in Canada, you will want good insulated rubber boots. Keep your tootsies warm and dry and you will have a much better experience. But say you are hunting the prairies of some of the western states. You may not have to put up with cold, wet conditions, but it still has it’s own issues. Does your hunting area have rattlesnakes? Some of the vegetation can even be hard to deal with. Rocky terrain? You might want something with strong gripping soles to keep a good footing on a crumbly rock face. The variables are seemingly endless. So put a lot of thought into how you will be hunting and go from there as to what boots you need. Cheaper though may not be better. I have bought many cheap boots over the years. Mainly because I have a problem with my feet. I have what is called a club foot. My right foot is a size 5, while my left is a size 10. For me to buy boots, I need to buy 2 pair! With this issue a $200 pair of boots actually cost me $400! Yeah that sucks but it is not something I can help. So most of my boots I have bought have been under $100. I usually only get 2 years out of them before I need new ones.

Most of the other accessories out there you probably will not need as a novice archery hunter. You should probably do away with all the calls and attractants on the market. While these are effective tools for the seasoned archery hunter, you should probably spend time learning your quarry before trying to fool them. “But I have been rifle hunting for years! I am not a novice hunter!” This may be true, but hunting during archery season is way different. Deer behavior changes through the course of the fall, and if you do not time everything just perfect, you may do more harm than good. If you decide to use doe in estrus scent at the wrong time, you may end up spooking deer out of the area. The deer know what is up in their home. I was having this conversation with fellow Full Metal Pro staffer Shad Masaros the other day about this very subject. I have tried a lot of those gimmick scents and calls, and 99% of the time they have produced zero results. It is better, in my opinion of course, to not let the deer think anything is up. Let them come in on their own, instead of trying to rattle them in. If not done properly, you might scare everything away. It is better to just be a ghost and not tip your hand.

I hope the opinions I have shared in this article, helps you when deciding what you should and shouldn’t buy when you are starting out. I have people every year ask me about this very subject, and I try my best to answer all the questions I possibly can. I meet people new to the sport all the time, and my best piece of advice is “keep it simple”. Do not over complicate things to much. Remember, the more stuff you have, simply means the more stuff that can go wrong. Try to limit these things to the essentials, at least for the first couple years. After that start building up the tools of the trade to make things easier on yourself. Plus I am sure you would hate yourself if you dropped $5000 on equipment and have it turn out that bow hunting isn’t for you or you find you don’t have the time for and quit. I pick up a new tool or two every year; some make the cut some do not. But if you take the time to actually think about what you really need, as compared to what you think sounds cool to have, you will have a lot less regrets.

Thank you for taking the time to read my article. With hunting season upon us, I would like to take this time to wish everyone good luck, and have a safe, and most importantly, fun season! I hope this is the year you get that trophy, and if you do, share them with me on my Facebook Page. Talk to you next month!!

One thought on “What Do You REALLY Need To Start Bowhunting”