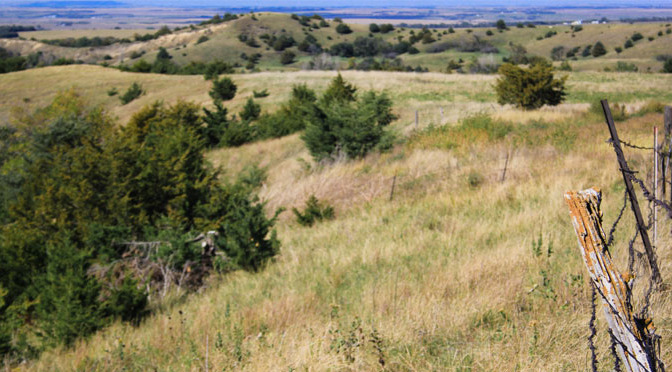 For some reason I thought I was here: 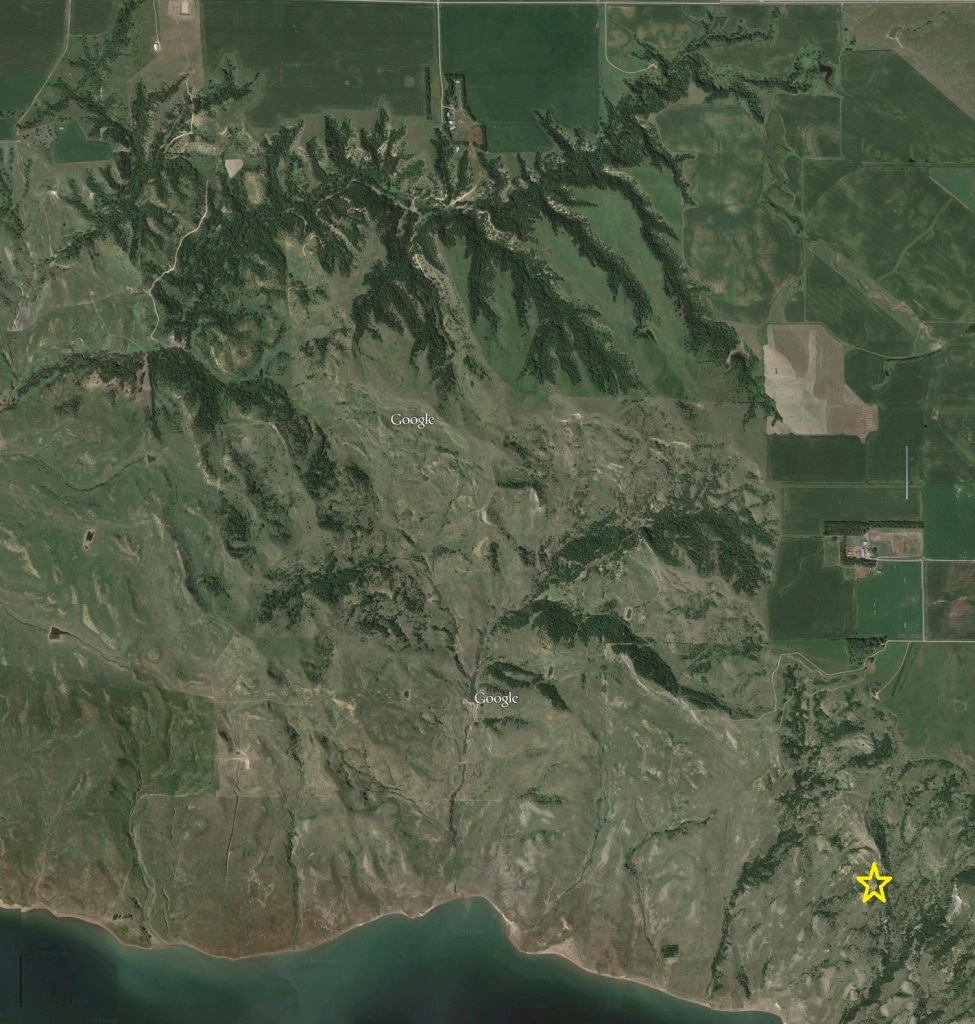 But in reality I was here: 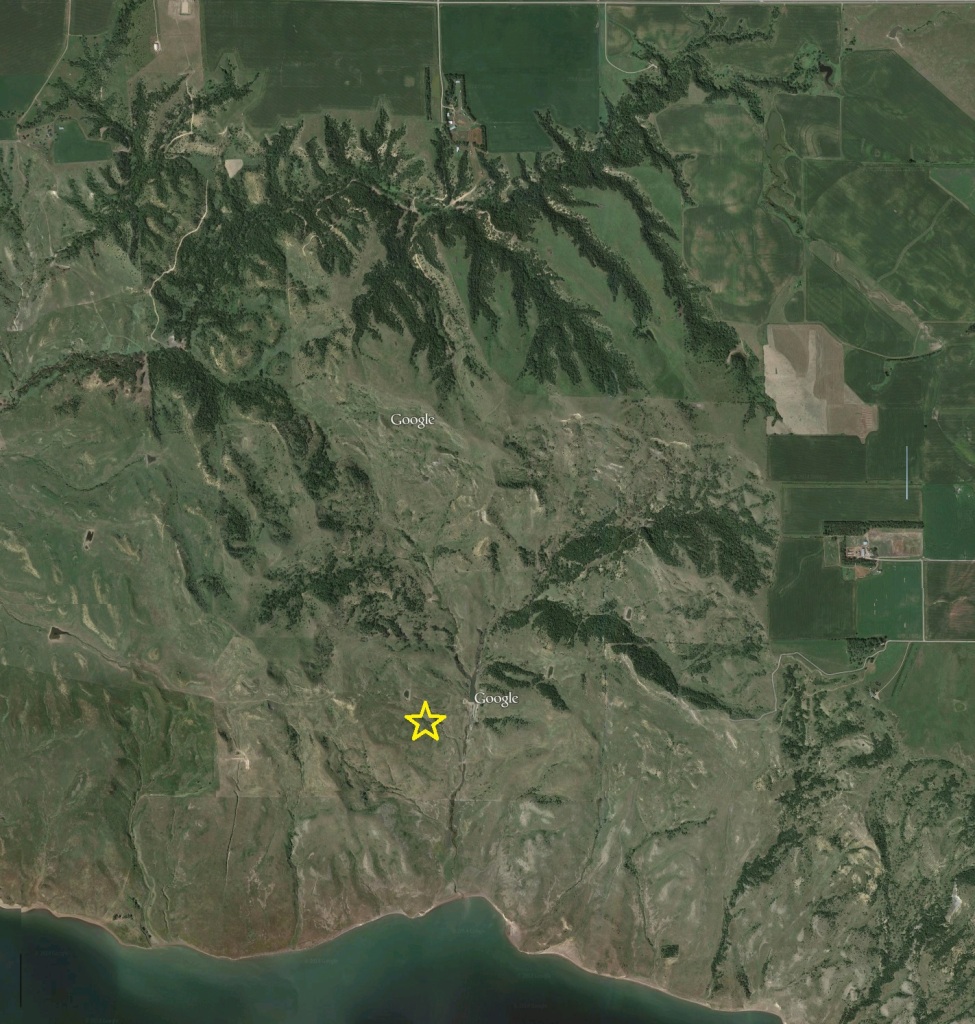 Thinking I had to head left to get back to my truck and turned and started walking.

Eventually I hit a fence.

A fence I knew was nowhere near my truck.

Cursing profusely I threw up my hands and thought “There has to be a road around here somewhere.”

The fence bordered a huge field. A part of me thought “Perfect! Fields mean farmers and farmers mean utility roads!”

Unfortunately, fields in South Dakota are quite a bit different than fields in Wisconsin.

I literally stood there scratching my head. This was a problem. I walked the field edges again and this time noticed a cattle trail that headed down into the ravine. Figuring it was worth a shot I headed in.

Cattle are a lot shorter than my 6’ frame so the path was low to the ground, I tried pushing branches out of the way and when that didn’t work I crouched down and moved forward. I crab walked and knelt and powered through a ridiculous amount of trees and brush until my back couldn’t take it anymore. I decided the cattle trail wasn’t working out for me so I headed back up towards the field, and stepped out into a completely different field.

Now I was REALLY lost.

I began walking north again, and was ecstatic when my phone started making this buzz…buzz…buzz…noise.

I did a little happy dance and thought “they’re looking for me!!!” I assumed maybe the forest service was trying to ping my phone’s GPS. With all the rain a dog would never be able to track me. So maybe this was a last ditched effort! Hooray!!

This buzzing went on for quite a few minutes before finally stopping altogether.

“Did they give up already???” I thought.

My heart sank as I realized…no, no one was trying to ping my GPS. My phone had gotten wet and was just being weird.

I checked my camera for the time and realized a whopping 50 minutes had passed. It was only 10 to 5.

So I kept walking. I hoped that maybe a farmer would see the light from my flashlight and come to investigate. I would have hugged the first person to come screaming at me about trespassing.

Before long I realized the little pinpoint of light to my west was a house light. That realization sent new energy into my sore and strained legs.

I kept heading across the field towards it, going over in my mind what I’d say: “I’m terribly embarrassed and I’m so sorry, I realize it’s 5 o’clock in the morning but I’ve been lost all night and have no idea where I am…could I take a look at a map?”

The house was about 100 yards away when I stopped dead. The edge of this field was bordered by a huge gully. Too steep to climb down I assessed my situation. Help was right there. RIGHT THERE.

And I couldn’t get over there.

So I kept walking. I found a path into another field and I went in thinking perhaps this one would provide safe passage to the farm house.

Which of course it did not.

By this time it was after 6am. The sun was scheduled to rise at 6:23. And I was looking forward to greeting the sunrise and finally being able to figure out where in the world I was.

As the sky lightened I headed for a rise in the field. If I could just pinpoint where the canyon was I could head back towards it and get my bearings.

I waited patiently, my wet clothes cold against my icy skin.

As in Stephen Kin’s The Fog kind of fog.

As far as the eye can see with visibility about 20 feet in front of me.

I’m pretty sure it was at this point that I began shouting every curse word in my vocabulary.

So I kept walking. Eventually the fog lightened. I made my way from one field to the next over the next, always heading north, backtracking more than once when an impassable obstacle presented itself.

There were times when I went to lay down…only for a few minutes of desperately needed sleep only to jolt myself awake as the cold numbed my arms before I could fall into a sleep I probably wouldn’t have awoken from.

Finally I came to the edge of a field. Yet another deep gorge stretching miles to the left and right separated me from the other side. There was no way around it.

But on the other side was something worth risking a broken leg and a sure death.

And a service road meant a way out.

So I took a deep breath and began my slippery 145 degree descent. I didn’t climb down as much as I slid down. I slid until my foot braced against the next tree, then slid down some more until the other foot hit the next tree after that.

It took forever but eventually I made it to the bottom. Covered in mud from head to toe, still soaked to the bone (it had stopped raining for about an hour at dawn and then started up again shortly thereafter), my tendons screamed in protest as I sat there, looking up at the other side which I had to climb.

I muttered “Suck it up buttercup” grabbed a hold of a nearby tree and began hoisting myself up. It was awkward as I still had my bow and tripod in one hand. Using the trees growing out of the side of the ravine like handholds, and digging my knees and shoes into the mud to propel myself upwards, I slowly and painstakingly made my way up.

When I crested the top I dropped my bow, tripod and backback to the ground. The corn was right there, 12 feet in front of me and in the distance I could hear the unmistakable sound of a whooshing car as it drove by.

Finally there was light at the end of the tunnel.

I opened the backpack, reached in and pulled out the one chewy chocolate granola bar I’d taken down for a snack when I’d left the farmhouse.

It was twisted and mangled and it was better than any caviar I’d ever tasted.

I tried not to think about how frigging awesome a whole box of the things would be as I ate my lone little bar.

I made my way to the road and flagged down a car. She showed me where we were on a map and said she was sorry she couldn’t drive me back to my truck because she was later for work.

I chuckled. What was 6 ½ more miles at this point?

I walked along the roads until I saw the driveway heading towards my truck. I was excited as I walked through the trees and stepped out onto the field my vehicle was parked. As I got closer I noticed two other vehicles parked next to my truck.

The land owners wife flew out of her vehicle and ran to give me a huge hug. The land owner and land manager were not far.

“You gave us quite the scare.” I was told. When I asked what time they’d noticed I was gone and had started looking for me I was told 9am.

I had to chuckle at that since at 9am I was already on the road walking back.

It didn’t all hit me until I got into my truck and turned on the heat. I think my body realized just how low my core temperature had dropped and I began shivering violently. I drove back to the loft and after I’d checked in with my husband and a few others who were worried they hadn’t heard from me since the day before I took the longest hottest shower of my life. Washing away 10 pounds of mud and grime and thorns and debris. The landowner and his wife treated me to a fabulous breakfast before I went back and slept for about 4 hours.

All I all I was lost for 15 hours in the pitch black darkness. While the experience really took the wind out of my sails I almost felt like everyone else was making more of a big deal out of it than I thought it was. People get lost in the wilderness 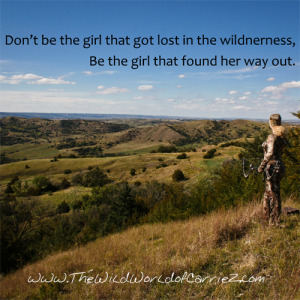 Everyone kept asking at what point I started crying. They are surprised when I say “I never did. I never lost my cool, I never lost my head. I knew I had to keep moving so I wouldn’t die of hypothermia. I had no one to blame but myself for this mess and I had no one to rely on but myself to get out of it. So I just kept walking. It never occurred to me to be scared, or to give up or to ‘not get it done’.” What good would have that done? Sitting on the side of a mountain blubbering my eyes out would have accomplished nothing, except to make me even more dehydrated.

The 50 degree weather wouldn’t have been so bad minus the rain and the wind. And even the rain was a blessing in disguise as it kept the animals holed up. It may have proven disastrous to have run into a mountain lion, a rattlesnake, wolves, coyotes or even a wild bison. Hypothermia can set in as low as 60 degrees so despite desperately wanting to take a quick nap I knew I couldn’t.

I just had to keep moving.

In the words of Sister Creep “One step and the next gets you where you’re going…” (Swan Song – Robert R. McCammon)

The unfortunate reality is: you never really realize how deep your well of inner strength is until you’re forced to draw on it. 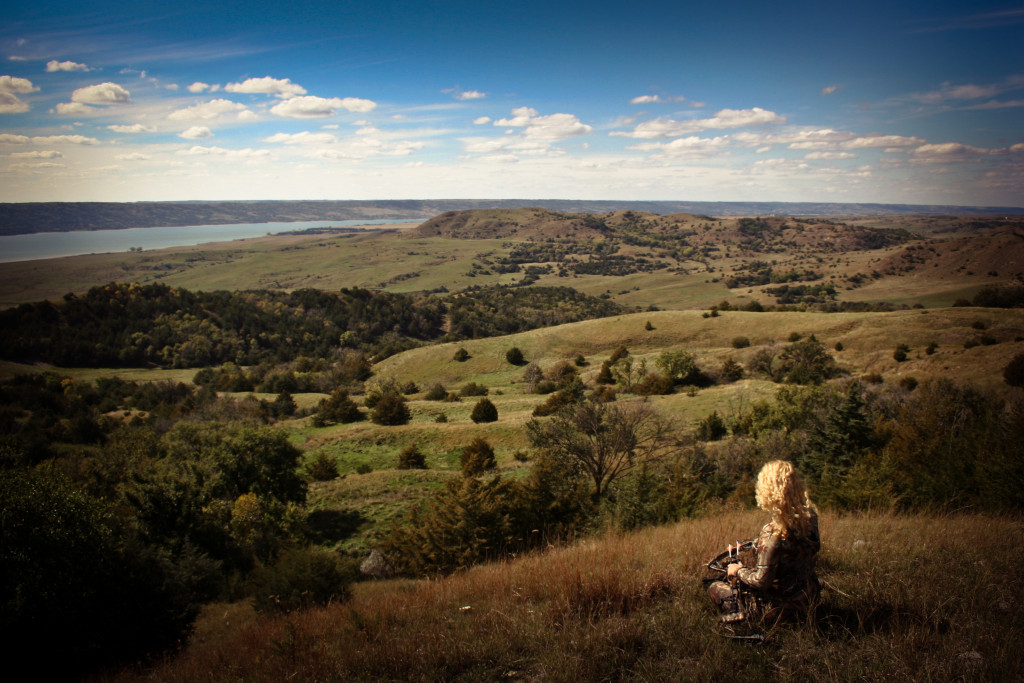 For your listening pleasure you can listen to the podcast where I tell the story here: wwocz.net/ep83

22 thoughts on “LOST! In the South Dakota Wilderness Part 2: The Fields”