It was about 10:30pm when I realized what I’d been taught as a young girl was not going to work out for me.

I’d gone down for an evening sit over a water hole that fateful Sunday evening around 4:30 pm. My phone wasn’t fully charged but I thought to myself “I’ll only be down there for about 2 hours so who cares?”

I’d settled in, snug under some branches of an old cottonwood tree, camera was set up, bow at hand, my ThermaCELL faithfully chugging away and keeping the blood sucking mosquitoes at bay.

At about 7pm I’d all but given up, I was hungry and it was getting dark, when I saw two young mule deer bucks step out from the far tree line. They wandered over to the water hole and I was disappointed that my 30 yard shot wasn’t going to do me any good, neither of them were shooters.

I watched, not wanting to spook them as they drank their fill and nosed around a bit before disappearing back into the far woods.

I sighed happily as I put my gear away and prepared for the trek back up to my truck. At least I’d seen something, and that sometimes is worth the effort.

I swung my backpack over my shoulder and stepped out from under the tree. I turned towards the canyon wall and hesitated, it was a lot darker than I’d realized.

I paused a moment, chewing the inside of my lip, knowing which direction I generally had to go in to climb up and out.

Within 15 minutes it was almost completely black out; I pulled out my trust Cyclops light and affixed it to my forehead. It was so dark, the light was useless. I took it off and held it in my hand, closer to the ground where it was much more effective, but still only illuminating a six foot radius.

I kept heading north but every few yards the landscape would dip sharply and my meager light would not cast enough light to distinguish if it dropped off two feet or twenty.

I finally crested a high ridge, it was completely black out and with no moon; I stopped to try and survey my surroundings. In the dim starlight I could just barely see the Missouri River to the south of me. I began heading “upward” again and every few feet I was met with a sheer drop off or a wall of cottonwood trees. It was simply too dark to tell which direction I was heading.

Thoroughly irritated I pulled out my phone to text the land manager: “I’m lost”, I opened my phone and watched in dismay as the swirling Verizon backdrop immediately came up – the graphics that meant my phone was turning itself off.

Muttering to myself I decided to find a high point and sit tight. As a child most of us are taught that if you ever get lost, to sit tight and someone will come and find you.

By 10:30, I realized no one was coming to look for me. I’d been sitting on that ridge, flashing S.O.S. with my head lamp in what I was hoping was the direction people would come for me.

At one point I nearly crowed in excitement as I saw two pinpoint lights far in the distance. I flashed my light and was happy to see a return flash. I watched as the one light bobbed along the ridge in my direction. After a while I realized those weren’t lights at all. It was simply my mind playing tricks on me…

Rather disappointed, I resigned myself to a somewhat cold night under the stars. I knew it was supposed to get pretty chilly out, but figured that despite my thin nylon pants and thin jacket – I would live, I’d be cold but I’d live.

I set about carving out a spot beneath a copse of cottonwood trees. Of course I hadn’t bothered to back an emergency kit with matches or a handsaw or anything smart like that. But I’d make do.

I was actually pretty comfortable until my ThermaCELL died on me. I’m sure you can guess my reaction when I realized that although I’d brought three ThermaCELL’s along on the trip, I’d grabbed the only one that didn’t have extra butane or mats.

As I sat there for a moment, I could hear the buzzing all around me, ominously getting louder and louder.

It didn’t take the miniature vampires long to find me, and my thin pants, beanie and gloves were no match for their sharp little mouths. I tried ignoring them. “Mind over Matter” wasn’t quite working for me at that point.

I knew I had to create some sort of barrier between them and me. So I started wandering around and grabbing up huge handfuls of grass. Returning to my little make shift hideaway when I couldn’t hold anymore in my hands, heading back out for more. After a bit I had quite an impressive supply of grass.

I laid back, head on my trusty Slumper Seat, an arrow at each side in the event something hungry stumbled my way, and covered myself head to toe with a two inch layer of wheat grass.

Perfect! I probably looked like an old Indian burial mound but I didn’t care, I was more comfortable than I thought I’d ever be.

I breathed a sigh of relief and closed my eyes, drifting off in hopes that I’d sleep away the hours until sunrise.

The peal of thunder off in the distance caused me to bolt into an upright position. I watched in horror as lightening streaked across the boiling clouds SW of me. I sat and watched a bit, hoping it was just a small isolated squall that would dissipate once it hit the river.

I was wrong, really, really wrong. What I couldn’t possibly know was an enormous thunderstorm had formed and was heading directly towards me.

I watched as the starlight quickly faded behind the black clouds and made a face as the first few drops of rain hit the grass in front of me.

My biggest concern was for the $2,000 worth of electronics in my backpack (none of which was a GPS of course). I tried tucking the bag under my bent knees but that displaced the grass opening my outer thighs and hips to the vicious little monsters. The trees were thick and I only felt a drop here and there at first. As time went on, the winds picked up and the temperature steadily dropped, the trees above me became saturated and soon I was soaked to the bone.

I didn’t have a watch on, my phone was dead and I had no way of knowing what time it was. It occurred to me that in the menu options of my Canon SLR, the date/time stamp would show me what time it was.

It felt like I’d been camped up on that ridge for hours.

I looked at my now empty bottle of water (which of course only made me immediately thirsty) and the single granola bar in my pack. I put the bottle out in hopes of catching some rain water (which really doesn’t work despite what the movies show you) and wrapped my arms around my legs contemplating what I should do. How long it would take for me to start shivering. I knew once my core temp got down far enough that I started shivering I’d be in big trouble.

After a few minutes my arms started feeling a bit chilled. I knew I’d better start moving around to keep my blood moving. Hypothermia can easily set in at 60 degrees. “Irritated” was the best word to describe how I was feeling.

“Well dumbass, you got yourself into this mess, you better get yourself out.”

I got up and gathered up my meager belongings. Using my little compass I got my bearings and faced north. I hitched the backpack up over one shoulder, grabbed my bow in one hand and my tripod in the other and started walking.

I walked for a few hours, it was slow going since I couldn’t see anything, twice I could see the top of the canyon only to be thwarted by sheer cliffs made of mud. If only it had been light enough to see that thirty feet to the right was a way up. 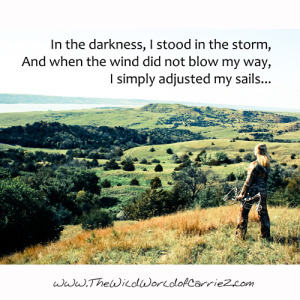 But I couldn’t see, so I wandered, hoping I was going in the right direction, desperately seeking some sort of shelter from the incessant pouring rain. But the canyon held no caves or overhangs, and it probably wouldn’t have done me any good if I’d found one anyway.

I would walk for a time, come to an unsurpassable gully and have to back track.

By 4am my brain was on auto pilot, I was utterly exhausted from lack of sleep, lack of water and trekking up and down 45 degree angles, mud deftly clinging to my shoes. Every few feet I’d peel off the huge hunks of mud only to have them be replaced moments later. After a while I just gave up and walked around with huge moon boots made of clay.

Finally…FINALLY I made it to the top of the canyon.

Unfortunately I was nowhere near where I thought I was, exhaustion clouds your brain and the mental snapshot you took of the terrain map gets a bit distorted…

For your listening pleasure you can listen to the podcast where I tell the story here: wwocz.net/ep83

8 thoughts on “LOST! In the South Dakota Wilderness Part 1: The Canyon”