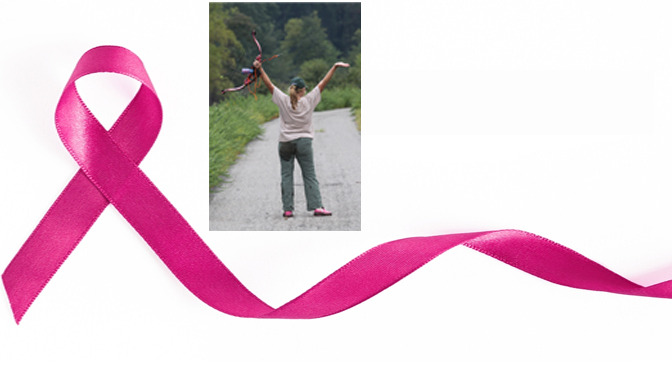 Breast cancer and all that it entailed were nothing new to me. The youngest of three sisters, I had already been helping my two older sisters fight the dreaded disease for several years. I can’t even say I was surprised that fateful day in 1999 when I heard the words BRCA1 positive (the breast cancer gene) and bilateral mastectomy when they flew across the doctor’s desk at me. Deep in my heart I knew it was coming.

As odd it may sound when I met with the surgeons about all the options one of my first questions was, “So, will I still be able to use my bow after this? Will I still be able to use my shot gun?” I’m sure they thought I was raving lunatic, but luckily I had a pair of the best surgeons in the country filleting me and they understood how important my outdoor lifestyle – my life outdoors – was to me and considered that a priority when selecting the type of surgery and reconstruction I would have.

Fast forward from all slicing, dicing and re-manufacturing of my bust line. It was a long process, I was restless, and more than ready to return to rebuilding my upper body strength, retraining muscles, and rerouting nerve signals. I started physical therapy as soon as receiving the green light from the doctors and made sure the therapist understood that one of my goals was to be ready to be in the tree stand by fall. Thankfully once again fate was on my side and the therapist understood clearly that I would work harder towards that goal than any he had so it was huge part of the plan.

That’s when I hit the wall – no matter what I tried, because of the extent of my surgery and reconstruction, the physical motion of drawing back was uncomfortable, it just plain felt weird. To be completely honest, it felt like the implant on my right side was migrating somewhere under my arm and hanging out around my elbow.

And being honest once again, I gave up. I decided that returning to archery just wasn’t going be something I could do. I would try periodically, feel like a wimpy weakling with an implant roaming around loose, and walk away frustrated and sad. I tried talking to various archery shops, archery manufactures, and that was difficult. As men they simply didn’t get it, and as men; talking about breasts and mastectomies and implants for God’s sake made them incredibly uncomfortable. Eyes would glaze over, they would fidget, and with a decidedly deer in the headlights look, flee to the safety of a sudden urgent phone call or bow emergency in the repair department. 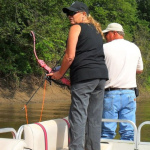 One late summer afternoon when all the fellas were dialing in bows, practicing, getting ramped up for the right around the corner opening of archery deer season, while I stood there snapping photos, kicking dirt, and in general pouting, complaining and feeling left out ; my friend Scott Huschle of DownRiver Outdoors said “ G – have you talked to Karen Butler from Shoot Like a Girl? I bet she could help. “

WHAAAAT???? There are women in the archery world that could help me figure this out? How did I not know this? Had I been living on some other planet?

Huschle generously gave me all of Ms. Butler’s contact information and I raced home to fire off an email. Suffice it to say that email ranks among one of the most important e mails I have ever sent in my life.

Ms. Butler was quick to reply with many great ideas as well as much compassion and understanding. Something I had not experienced from the many archery resources I previously explored.

As luck would have it, Butler would be in my area soon, at the huge annual Hunting and Fishing Days event held in our area. I couldn’t wait to meet her in person, try some bows that she suggested and see what we could come up with.

I was ecstatic that I had found a woman archer to talk to about the situation, not just a woman archer but one of the best and one who has made it her mission to introduce and support women in archery.

That hot September Saturday that Karen Butler spent a great deal of time and effort working with me gave me a renewed hope that I could indeed return archery. She also helped me to realize that while I could return archery I might not be able to return to what it was before, but where there was a will there was a way, a bow, and an archery activity.

My biggest issues initially came with trying to use a compound. It simply didn’t work for me. No matter how hard I tried to rebuild the strength, to retrain the muscles, pulling it to break over cam and then holding it just wasn’t in the cards.

But between Ms. Butler and my friend Christine Appleberg , of Illinois Bowfishers, I learned that I could indeed use a recurve, I could use a long bow, and holy smokes, I could fling arrows like madwoman at fish and hit them! Success!!! Harvesting meat for the freezer yet once again!

It was standing by a spillway sticking gar that I had an epiphany of sorts; I’ll never be able archery hunt for large game again with a compound bow. But I had worked hard enough to now bowfish with a light draw Mission Craze. That was huge step and huge accomplishment for me. I realized I could certainly target shoot and bowfish . I accepted that and realized any archery is better than no archery!

Yet being able to pull the required 40 pounds to hunt, to this day eludes me. Not only do I still have few issues from the radical mastectomies, reconstruction and additional surgeries, I have Multiple Sclerosis and that further hampers my upper body strength. I have however resigned myself to the use of crossbow for hunting larger game.

Here are few tips for women returning to archery after mastectomy. First and foremost discuss it with your physician to insure that you are ready and that there are no medical reasons why you should not begin working towards the goal of sticking that arrow in the bull’s-eye.

Ask your physician for a referral to physical therapy that can help you develop a plan to strengthen and rebuild the muscles, nerve pathways, and endurance needed.

Start small. Picking up your regular hunting bow and giving it a pull is likely to not be successful initially, and can increase your sense of frustration. Try one of the Genesis bows used in the NASP or a light draw weight recurve initially. It’s all about baby steps. Baby steps. Each small victory will help to increase your confidence.

Reach out to other women archers, such as Karen Butler and Shoot Like A Girl.

Keep trying out bows! As your strength and resolve grows try out every bow that crosses your path. Be the most annoying and time consuming customer that the archery dealer has ever seen. There IS one out there that will work for you!

Accept limitations as they come along. Can’t pull enough to hunt game, but can pull 15 or 20 pounds? Find a bowfishing organization, learn to bowfish. I promise you the first time you see your arrow dance and that carp or gar flop and fight, you will be renewed and know that indeed archery is still possible.

Allow yourself time – the journey for me from the first arrow out of my nephews recurve to standing on the platform of a bowfishing rig flinging arrow after arrow at invasive carp was a several year adventure.

Most of all love yourself, celebrate every day, and in the words of one my best outdoor mentors, the late Deb West of Brownwaterdogs “ YOU CAN DO IT!” 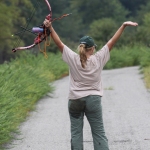 Remember – the fierce Amazon warrior women cut off a breast in order to make them better archers and stronger warriors.

We are warriors too!

One thought on “Archery After Mastectomy – YOU CAN DO IT!”