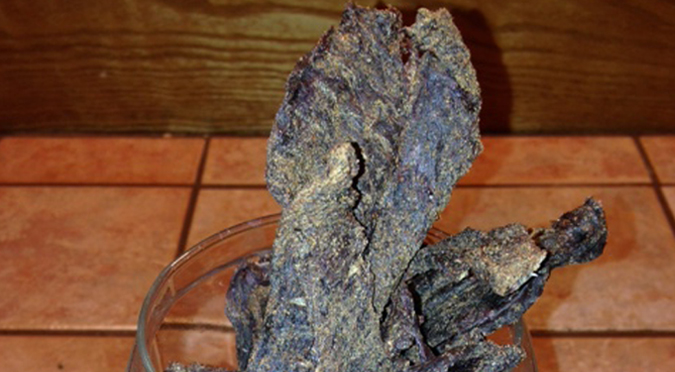 You’re probably thinking “Paleo?” what the heck is he talking about? Let me explain the concept of the Paleo Diet.

It’s a simple concept based on the theory that we (humans) should go back to eating like cavemen.

I challenged myself to try and come up with a good jerky recipe to share with the world, since deer season has either begun or is just around the corner for most of us. But the challenge had to be something creative, so I thought let’s make jerky minus the usual soy sauce, brown sugar and vinegar!

I usually make a marinade to soak my strips of jerky in overnight based on Soy sauce, Worcestershire sauce and some other liquids, but sticking to this paleo challenge I decided to make more of a rub.

Prepare your jerky, I know for a fact that Carrie uses the Hi Mountain Jerky Preparation Kit and loves it, it doesn’t matter if you use a jerky board or a jerky gun, prep about 2 1/2 pounds of venison by trimming skin and fat.

There are some tools I highly recommend all hunters should have and a good dehydrator for jerky and dried fruits is a must. I have been making jerky for years, using two “American Harvest“ dehydrators. Good sharp knives to make the job of trimming easier, faster and safer. And if you really want to make a lot of jerky a meat slicer is the top of the line.