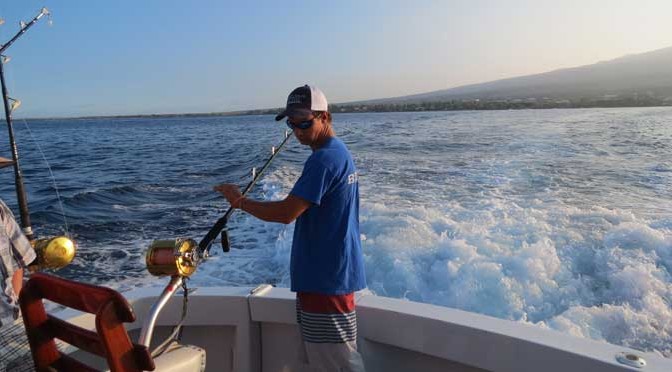 No trip to Hawaii can be truly complete without spending some time on the water. When we returned to Hawaii for our five-year anniversary last June, my wife knew we were spending at least part of a day on a fishing charter. Visiting the Big Island rather than Maui, the cost of the outing was more reasonable than our previous trip. It also had the added benefit of being in fabled Grander Alley.” 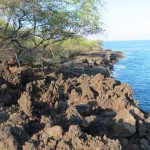 The Kona Coast, on the lee side of Hawaii is revered by billfisherman around the world for the size and number of pacific blue marlin that lurk in its waters. Exact counts are difficult to come by, but in excess of 60 fish topping the 1,000-pound mark have been pulled from these waters, earning the Grander Alley moniker.  Additionally, the current IGFA record marlin, a 1376-pound fish taken in 1982, came out of the waters off Kona.

My wife and opted for a ½ share charter with Bite Me Sportfishing. Charters are available as a share, with four to six people each paying a share, or portion of the total charter fee. This is an affordable option for someone that wants to spend some time on the water, but can’t manage the entire charter fee themselves. Based on the big island, Bite Me’s rates were reasonable, especially when compared to rates on neighboring Maui.

Most of the Bite Me boats, six total, dock in the Honokohau Harbor, just south of the Kona Airport. They also operate a fish market and restaurant there. I recommend the peel and eat shrimp and the ahi Rueben. The exception is the Bite Me 4, which departs from a slip at the Kona pier. As it happens we were fishing with Captain Mike, and First Mate Sawyer on the Bite Me 4. A fact that saved us 20 minutes of driving first thing in the morning.

Fishing off of Kona isn’t like fishing in the Keys, or the Outer Banks. There is no bottom fishing. If the big fish aren’t biting, there isn’t a safe zone to run to just to tighten some lines. We spent most of our day between two and four miles off the shore. A quick look at charts off the Kona coast lets you know, even that close, we spend the day in water several hundred fathoms deep. It’s this deep water so near shore that Captain Mike told me draws so many fish to the area. 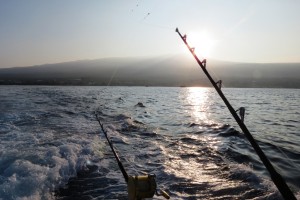 We did have a marlin punch at one of our lines. Seemingly out of nowhere a flash of blue erupted from foamy blue of our wake. He missed the plug we were trolling, but that glimpse alone was enough to understand why so many fisherman dedicate so much time to chase these titans of the deep.

Personally I had hoped that my line would attract a yellowfin tuna. Specimens from 100-200 pounds are not uncommon and draw significant interest in the fish market. I assure you this desire had almost nothing to do with my affinity for ahi sushi.

As it happens the only fish we managed to tangle with that day was an Ono (wahoo) as we were transition from the shallow water near the pier to the deeper water we were headed to for tuna and marlin. Amazingly, the strike occurred while the first mate was explaining what to do and how to do it when hooked a fish. As luck would have it, I had the camera rolling to capture his instructions, and managed to film the entire thing, from strike to gaff.

For more information on Bite Me Sportfishing visit, www.bitemefishmarket.com or call 808-327-3474.

2 thoughts on “Fishing in Hawaii with Bite Me Sportfishing. Plus a bonus video!”