Being mid January here in the brutal Northwood’s, I am sure most of us locked up inside our houses, sitting very close to our fireplaces (or heating vents for you city folk) just trying to stay warm. It has been an extra voracious winter here in Wisconsin, and most would think it crazy to want to venture outside for longer than it takes to get to your car, our worse case scenario, the mailbox. As I sit here writing this it is -20 wind chills! So what is it that makes it worth doing more? If you ask me lots of things will be getting me outdoors very soon. So I figured I would take this time to let you know of a few of the things that make Wisconsin, a sportsman’s paradise, even in the dead of winter.

The cold winter has had some added benefits to the winter sportsman this year. The early cold and sustained freeze has our lakes locked up with great ice all season, and has led to some of the best ice we have seen in years. It has been a long time since we have seen 2+ feet of ice on a lot of lakes. Open holes and snow melt during prior seasons on Lake Winnebago has led to some bad visibility in the water.

Visibility is a key success in the upcoming sturgeon spearing season. Sturgeon spearing season on Lake Winnebago and it’s upriver lakes Winneconne and Poygan, have been a mecca for thousands of residents from all over the state of Wisconsin, every early February. Spearers set up shanties or “dark houses” all over the lakes. Sometimes forming what locals call “shanty towns”. In the ice under 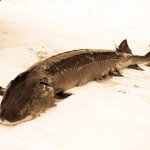 the shanties a large hole is cut into the ice from a chain saw with a massive bar and chain. Fishermen stare down this hole, big enough to fall in if you fall asleep, from 7:00am-noon. Some spearers choose to set up over 12+ feet of water, making visibility a must. With good ice and the cold temperatures looking to hold out, travel and water visibility should be top notch this year, hopefully assuring a successful sturgeon season for many. The season runs from February 8th until a quota has been met. Once the quota has been reached it will shut down the next day. For more info on what it is like check out Carrie Zylka’s blog “Sturgeon Spearing AKA Dinosaur Wrangling in Wisconsin“.

What makes it good for the sturgeon spearers also makes it good for the rest of us ice fisherman. So do not worry if you did not score a tag for one of those huge prehistoric fish, the ice fishing has been awesome this year! And with a lot of tournaments and events coming up during the peak ice season, there are numerous occasions to get you and your family out for a fun day on the ice. Lake Winnebago host numerous ice tourneys through the season. February 1st is the Otter Street Fishery. With prizes and live music from the band “Roadtrip”, it makes for a fun time. Otter Street Fishing Club is a local fishing club out of Oshkosh, Wisconsin. They spend a lot of time maintaining roads and bridges, making the lake a much safer place to fish.

Almost every weekend from here on out there is a big ice fishing event somewhere in Wisconsin. On February 15th in the scenic town of Amberg, WI, There is a down right riot of a good time on GlenLake. The Tournament is sponsored by The Amberg Pub. The north woods region of Wisconsin is primed for some great snowmobile riding and the Amberg area is no exception. So this event is would make for a great weekend getaway. With ice fishing and entertainment on GlenLake on Saturday and riding the trails all day on Sunday, life could not get any better. Make sure while you are up there, you stop in and say hi to my friend Pat Szalanski, at the Amberg Pub in downtown Amberg. Tell him I sent you, he will treat you good. 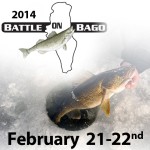 There is no shortage of fisherees and tournaments to get you on the ice in Wisconsin. Lake Winnebago in Oshkosh, WI is home to one of the best and biggest ice fishing extravaganzas in the world. The Battle on Bago ice fishing tournament attracts thousands of anglers from around the world. The tournament itself runs from Friday February 21st at 6:00am and continues through Saturday February 22nd. That is 32 hours of straight fishing! The registration stations will be open 4pm-8pm on Friday and after 9 on Saturday. Battle on Bago spokesman Glenn Curran said “This format should give anglers plenty of options and access to other landings which should alleviate the congestion we’ve seen the last few years on Merritt Ave. ” Glenn went on to say “100% of the net proceeds go back to benefit youth and conservation efforts in Wisconsin. Our goal now is also to build a foundation to fund larger projects in the future. So far we’ve raised and donated $500,000 in 6 years and expect to raise $250,000 this year.” Those kinds of reasons are good enough right there to justify my entry fee. Add that with the live music and the fun atmosphere of the beer tent, and did I mention the prizes that include new trucks and boats? All that and you got yourself a good time! Get more information from their Facebook site at https://www.facebook.com/BattleOnBago. Tickets can be purchased at Mill’s Fleet Farm, and other places listed on there website.

But maybe fishing is not your thing. Hope you are not too burned out from the fall hunting season. The winter hunting season is upon us! Grab that 22 or .17HMR or favorite shotgun and get out for some small game hunting! Reports abound from around Wisconsin of a great population of rabbits this year. Wisconsin is in an up year for rabbits in a lot of areas. Open season for bunnies goes until February 28th, with snow shoe hares being open year round. When you have a good crop of acorns you have a good year for squirrels. Find an area with good acorns and you should have some fun with squirrels. Squirrel season closes January 31st. Take a kid out with you! You know they need to get away from the video games anyway! It is a good time to introduce your children to hunting. And a day spent with family in the woods is a day well spent. Fox and coyote breeding season is here and it makes a good predator hunting time here also!

It does not matter what it is you like to do in the outdoors, there is something for everyone here in the Wisconsin wilderness. Whether it is bird watching, to snowshoeing, hunting, fishing, snowmobiling, hiking, even camping, you can still do it all. Whatever the reason, whatever the activity, I hope this inspired to you to venture out and brave the cold. The outdoors lifestyle does not stop because it’s a little chilly out. Throw on a jacket, pull up your big girl panties, and get you and your family outdoors on your next weekend! And for gosh sakes have a little fun! It is what it is all about anyway right?

I hope you enjoyed my latest article. It is hard for me not to be excited about this time of the year. Make sure to stop by frequently in these upcoming months, I have lots of new things I will be playing with and want show you all. We just got back from the Las Vegas SHOT Show and let me tell you, there are a lot of new things coming from the outdoors world and you will not want to miss it! Until then, keep on living the Willes Way.

One thought on “An Outdoors Report from a Wisconsin Wild”