The Day I Wished I Carried A Gun…and my five biggest take aways from this experience.

It all started innocently enough. In early December I was in Indiana for work, it was a Wednesday night and I was sitting in my hotel room surfing the tv channels. My stomach started growling so I thought I would walk over to one of the nearby restaurants.

No big deal. There was little to no traffic, and not too cold. I made it there without incident.

Not unusual, taking a seat at the bar I ordered my dinner and a cocktail. As I was finishing up I noticed three men sitting at the far end, they were business men, and had obviously been drinking for quite some time already. The third one decided to buy everyone sitting at the bar a drink.

The bartender poured a beer for the lone gentleman sitting to my right and asked what I would like to have.

The bartender and the drunk business man began badgering me in a friendly fashion, and I politely declined once more.

I requested my check and the bartender managed to talk me into one drink.

We sat for quite some time, and the conversation bounced from the three businessmen, to the gentleman sitting to my right and eventually a lone waiter who decided to have a drink (that the drunk businessman INSISTED on buying) after his shift. After a bit I asked the bartender if there was an easier way to get back to the hotel and he let me know there wasn’t.

I again asked for the check and went to the restroom while I waited for him to print it out.

When I returned I was dismayed to find a shot sitting on the bar near my coat. “I don’t want this.” I told the bartender. One of the businessmen let me know that everyone was doing one and they’d been waiting for me to get back so they could drink them.

Feeling incredibly awkward and on the spot I joined in and pulled out my card to pay the bill.

And that’s when things went sideways. The gentleman sitting next to me was clearly agitated. He moved to the next seat closer to me and told me that while I’d been in the bathroom the three businessmen had made it very clear that they knew I was walking back to the hotel alone and that I should call someone to drive me back.

To which I replied “Great, no uber in this town!”

Well F me and the guys at this bar who just realized I’d be walking back to my hotel ALONE.

The businessmen saw the man had moved closer to me, the very drunk one came over and sat in the seat directly next to me and began asking me questions, being extremely vague (and trying to figure out how to handle this situation) I deflected his inquiries.

Twice he touched me, once he laid his hand on my arm and I politely removed it. A second time he reached up to touch the curls of my hair at which point I simply stated: “Please don’t touch me.”

The bartender intervened and insisted the man go back to his seat, and I asked him to call me a cab.

The businessman went back over to his friends and they began making comments about parking lot tackles and (loudly) how they’d be oh so happy to escort me back to my hotel.

Another forty five minutes flew by and they became more and more aggressive as I waited impatiently for the cab to arrive. The restaurant was closing for the night and I’ve never been more relieved to hear the owner tell me the cab was waiting outside.

I snatched up my coat and bolted for the door. As the cab was backing away I watched the three men exit the front door and clearly look for me.

I’ve been in precarious and dangerous situations before but this one truly shook me up. If the lone gentleman had decided not to tell me because it was “none of his business” I would have innocently walked back to my hotel none the wiser.

Back at the hotel room I breathed a sigh of relief.

And I cursed myself for being so careless.

My five take aways from this night.

#1. My first mistake was letting ANYONE know I was walking back to my hotel alone.

In telling the bartender, one of the businessmen overheard. They may not have had nefarious intentions at first, but as you drink, you get more bold. You see a pretty girl sitting alone and think of all the things you’d like to do to her… It’s a classic situational awareness mistake. And one I rarely make. But when I do….I REALLY DO.

Not everyone is out to hurt you but whenever you are around strange men be on your guard and trust your instincts. If you feel uneasy: go somewhere else. It’s as simple as that.

#3. Allowing myself to accept the two drinks from the group of men was a mistake and sent the wrong signal.

It’s truly unfortunate that in this day and age a female can’t accept a drink from any male without assuming it’s roofied or comes with strings attached.

I genuinely didn’t want to drink them, and while I normally don’t bow to peer pressure for some reason I let my guard down. They seemed so nice and fun if a bit drunk. It was only later that I realized exactly what their smiles hid. Unfortunately it emboldened the entitlement scenario: “I bought her some drinks, I should get something out of the deal.”

Being adamant that you don’t want them doesn’t make you a bitch, it makes you safe.

If I’d had my gun with me, I could have protected myself if they had indeed caught me alone in a parking lot. If you’re flying, you can check a handgun just like you do a rifle so there’s no excuse not to have it with you if it is allowed in that state. Many states have reciprocity recognition, or allow permits to be issued to non-residents. It is of course determined by each state’s laws but the state I was in would have issued me a permit if I’d had a bit of foresight.

Go to http://www.handgunlaw.us/LicMaps/ccwmap.php to see which states reciprocate with yours.

I chose Wisconsin. As you can see Indiana has the reciprocal recognition. 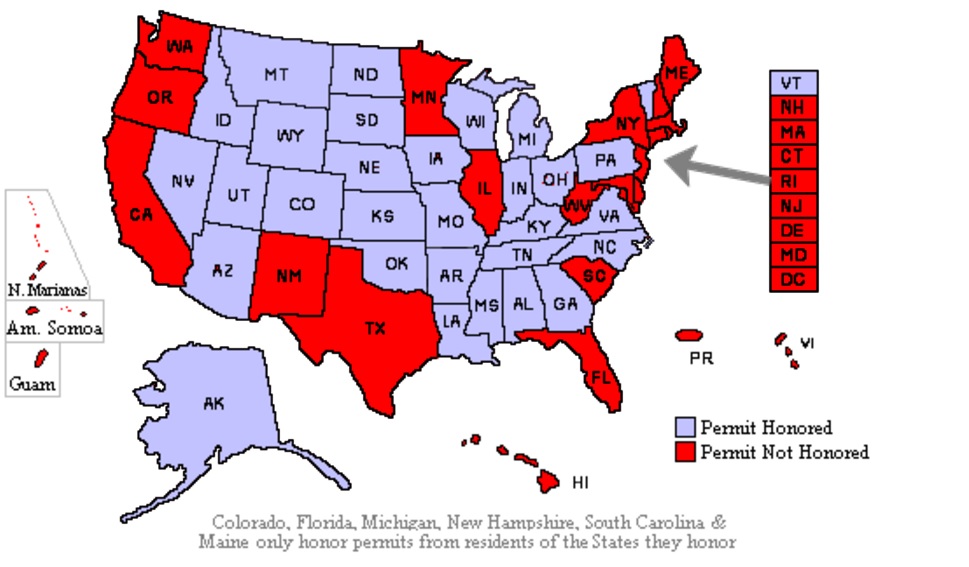 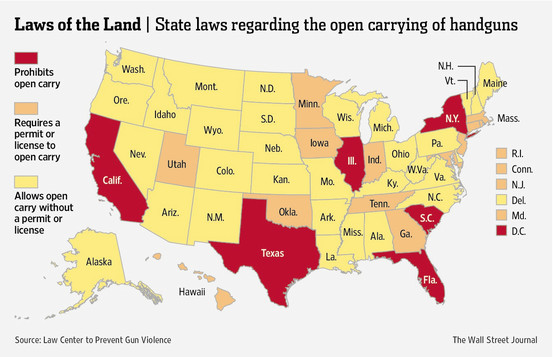 Within an hour that one tweet generated several concerned followers who lived nearby. Eleven different people messaged me with offers to bring their wife/daughter along to give me a ride to my hotel. The thought of these people willing to drive an hour or more to give me a 5 minute ride, and do everything they could to make me feel safe truly touched my heart. There are a lot of really, really good people out there.

The night ended without anything happening but it was a wake up call that I’d become too lax over the years. I’ve fallen prey to the “I’m not as pretty as I once was, I’m not 22 and gorgeous anymore so I probably won’t have to worry as much as I did back then” mentality. But the reality is a predator doesn’t care if you’re 22 or 82, they will see an opportunity and seize it.

It is our job to prevent them from succeeding.