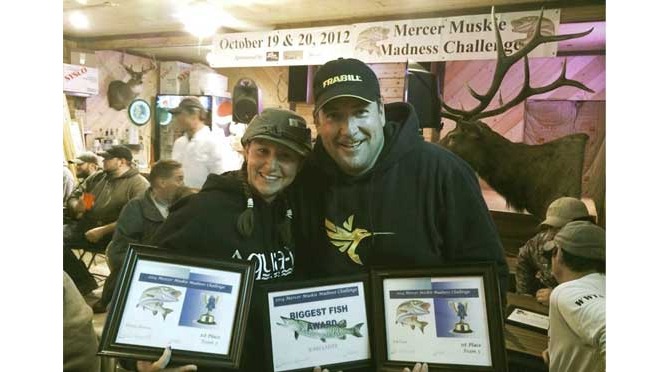 The event challenged 29 two-person teams to catch, photograph and release as many muskies as possible from any of ten Mercer-area lakes over the two-day tournament duration. Scoring was based on a total point system, with eight points awarded for a 36-38” fish, ten points awarded for a 38-40” fish, and 25 points for any muskie over 40” plus one point per inch or portion thereof above the 40” mark. The rules allowed each angler to fish with two lines – one artificial bait and one live bait per angler.

The month of October typically brings some of the best muskie fishing of the year to the upper Midwest, as rapidly falling water temperatures trigger increased feeding in the big predators. The visiting team of Josh Lantz (New Buffalo, Michigan) and Kristen Monroe (Elkhorn, Wisconsin) had fished several Mercer area lakes early last summer, but knew they’d need to change their game plan and look for a new lake with more dramatic structure if they had any chance of competing with the throngs of local guides and avid area anglers in the tournament field. “Once the weather forecast came in, I knew we’d need to fish as many deep breaks and as much vertical structure as we could find,” says Lantz, who carefully studied the high definition detail of all available lakes on the LakeMaster GPS Map Card in his Humminbird sonar/GPS unit and ended up selecting Spider Lake on the upper section of Iron County’s Turtle River system. “Even though we’d never fished it before, Spider appeared to have the best combination of deep water breaks and other key structure that we expected to be appealing to big muskies during the fall transition,” concludes Lantz.

The first day of competition brought a 15-degree drop in temperatures, soaking rains and 20 mph northwest winds to the Mercer area. With water temperatures hovering around 49 degrees, Lantz and Monroe launched from Pine Forest Resort and headed to the first of three key spots on Spider Lake that they resolved to fish for the entire tournament – all of which had the steepest breaks on the lake, were between points, and also had boulders or stumps. Lantz and Monroe’s strategy was to cast and deep jig heavy soft plastics like Buldawgs and Medusas along the breaks while soaking large live suckers on fluorocarbon quick strike rigs beneath the boat.

The action started quickly, as a dark form shadowed Lantz’s Bulldawg to the boat just before 9:00 am. Both anglers began frenzied figure eights, but the fish disappeared immediately.

Minutes later, however, the telltale clicker on one of the team’s sucker rods began to scream. Lantz plucked the rod from its holder and waited for the fish to stop its initial run. “When a muskie takes a sucker, she usually grabs it sideways and moves away with it,” says Lantz. “When she stops, she’ll reposition the fish to eat it headfirst,” he continues. A few seconds after the muskie stopped moving, Lantz brought the line tight and set the hook with all the power he could muster from the 8’-6” St. Croix Mojo Muskie rod. After a brief fight and flawless net work by the diminutive Monroe, the big muskie found its way into the couple’s Frabill Conservation Series landing net.

Measuring over 41” on the tournament-issued bump board, the fish was photographed and released just two hours into the two-day tournament. After a brief celebration, the team reset their lines and began fishing again, confident in their good start, but largely oblivious to the true importance of the fish they’d just released.

The remainder of the day brought mixed results, with two additional sucker bites that were not converted. “One fish took the sucker, dropped it, and never came back,” says a disappointed Monroe. “Another took the bait and broke Josh’s main line on the hookset,” she continued.

Lantz and Monroe continued fishing hard throughout the cold, wet and windy day one. “While we felt good about the fish we measured, we felt sick about the two we’d lost,” Lantz says. Suddenly, there came renewed optimism, as Monroe’s St. Croix Premier doubled over.

“I was casting a gold and white, walleye-colored Medusa along a deep weed edge when it hit,” says an excited Monroe, who only began muskie fishing earlier this summer and had yet to land her first fish. “She did an awesome job,” says Lantz, who in addition to working as the Executive Director for the Association of Great Lakes Outdoor Writers (AGLOW), a freelance outdoor writer and media relations representative, was also a fly fishing guide for muskies and other species in Northern Indiana and Southwest Michigan for nearly fifteen years.

When the healthy muskie was brought to the boat, the 32” fish was too small to earn the team additional tournament points, but was a landmark fish, nonetheless. “I had opportunities on two muskies earlier this season,” says Monroe, who in addition to selling advertising for the popular Illinois and Wisconsin Outdoor News publications, also writes popular stories and columns for Outdoor News and a variety of other outdoors and shooting publications. “I actually wrote an article about my previous muskie fishing trip to Mercer in Wisconsin Outdoor News a few months ago,” says Monroe, who resolved to come back to fish in the Mercer Muskie Madness Challenge and hopefully put her first muskie in the net. “Regardless of how we’d end up in the tournament, I was so happy to have caught that fish,” she continues. It would be the last fish of the day – and the tournament – for Lantz and Monroe.

With no tournament rule requiring day-one reporting by competitors, Lantz and Monroe were unsure of their position in the standings going into day two. Rumors about a Facebook post of the team’s 41+” fish, however – combined with chatter from the field about tough fishing conditions during dinner at the Gateway Lodge tournament headquarters that night – gave the duo more than a glimmer of hope that they might still be in the running, especially if they could produce on day two.

The team returned to Spider Lake on the second and final day of the tournament, only to be greeted by even colder temperatures, stronger winds and snow squalls. Despite fishing tirelessly all day, Lantz and Monroe didn’t see a fish all day. “That’s muskie fishing,” says Lantz, who joked that the pair should have gone grouse or duck hunting instead. “While we didn’t move a fish, we still had a great day in a beautiful place,” adds Monroe. “The sun came out and the wind died down during the afternoon and we saw eagles, deer, loons and otters. Even if the muskies aren’t biting, a day outdoors in Mercer beats just about anything I can think of!” she concludes.

Tournament competitors gathered at Gateway Lodge that evening for an awards ceremony and program, celebration dinner, and a silent auction of donated muskie gear and other outdoors items to benefit the Wounded Warriors In Action (WWIA) Foundation, a non-profit organization with the mission of serving our nation’s combat wounded, Purple Heart recipients by providing world-class outdoor sporting activities. After an informative program delivered by Wisconsin Fisheries Biologist, Zach Lawson, Mercer Area Chamber of Commerce Director and MMM Challenge Tournament Director, Tina Brunell, introduced wounded warriors Tony Pemble of Mercer and Doug Alderton of Rhinelander, Wisconsin – both Purple Heart recipients who served multiple tours of duty in Afghanistan. Alderton gave a stirring speech, enlightening the crowd on the array of challenges our soldiers face when returning home from service. “When our wounded warriors come home from such traumatic circumstances, they long for a return to ‘normal’, but struggle to find it,” says Alderton. “Our organization and the important help you sportsmen give us shortens and softens that journey,” he continues.

Overall, a total of 12 scorable fish were caught and recorded over the tournament’s two-day duration. An additional eight muskies under the 36” minimum size were also reported. When the awards ceremony got underway, Lantz and Monroe were genuinely surprised to learn that their lead had held out. With the torment of the two lost fish finally behind them, the team of visiting outdoor writers earned 27 points for their big, day-one muskie, which was good enough to take first place overall and big fish honors for the tournament. Lantz and Monroe took home over $1,300 for their first place and big fish wins.

“Catches were down a bit this year due to the weather,” says Brunell, “but we certainly had a fun time raising money for Wounded Warriors In Action and made a bunch of new friends.”

Of course, given her position with the Mercer Area Chamber of Commerce, she also hopes the event will continue to spread the word about the great muskie fishing and other outdoor recreational activities available in the Mercer area. Brunell continues with a wink and a smile: “We figure the fact that a couple of popular outdoor writers won this year’s tournament can’t hurt.”

From the backwoods waters of the Turtle Flambeau Flowage or one of 214 lakes, you are sure to find a top notch fishing adventure in Mercer, Wisconsin. Mercer also has plenty of other outdoor activities such as snowmobiling, ATV/UTVing, hiking, biking, skiing, hunting, bird and wildlife watching all within our 377,000 acres of public forestland. Visitors will find a variety of lodging and camping options, fantastic dining and north woods watering holes, plenty of places to shop for amenities and gifts, and a range of services for your convenience. Plan your north woods adventure at www.mercercc.com.

ABOUT WOUNDED WARRIORS IN ACTION

Established in 2007, the Wounded Warriors in Action Foundation (WWIA) is a national 501(c)(3) non-profit organization headquartered in Apollo Beach Florida. The WWIA serves our nation’s combat wounded Purple Heart recipients by providing world-class outdoor sporting activities as a means to recognize and honor their sacrifice, encourage independence and connections with communities, and promote healing and wellness through camaraderie and a shared passion for the outdoors. Learn more at www.woundedwarriorsinaction.org.