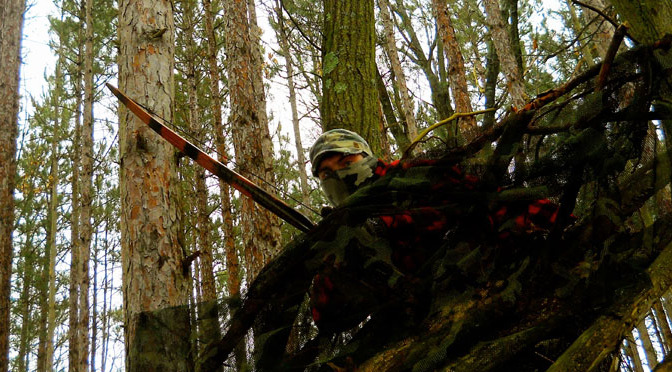 Bowhunting on the ground is a heart-thumping endeavor that appears to be on the decline due to the popularity treestands. While it is true treestands offer considerable advantages, the experience of taking an animal at eye-level close enough to hear it breath is incomparable.

I’ve been hunting from the ground since my archery inception and have preferred it from day one. The desire to do so came about by necessity. I didn’t own a treestand, having spent all of my income on my bow, arrows, and broadheads and land opportunities were fairly limited and primarily public.

Starting out at the ripe old age of 27 with little money, traditional gear, limited land, and absolutely no hunting experience was eye opening to say the least. Adding elevation to the equation would have most certainly ended in a career-ending, injury-related disaster. Staying on the ground was the safer and more economical way to go.

I started out simple, hunting from a shanty blind behind my Grandmother’s farm. It was facing an orchard and looked (and smelled) like an ideal spot. I settled in before light, but soon learned the limitations of my gear when I tried to draw my 64” longbow and raked my top limb against the ceiling. To shoot anything, would require my backing up to the far corner of the blind, kneeling down, and shooting through the far window in the most awkward of positions. As dark as the blind’s interior was, that wasn’t going to happen without being seen.

I scoured the Web for portable options, but was having trouble finding anything that would accommodate my bow. Being 6’4” didn’t help. The blinds that were large enough were too expensive to be considered. Fortunately an answer arrived in the form of my father, who’d been hunting from natural blinds all his life. He took me out, showed me the ropes, and told me to give it another go the following weekend on some public land behind his house.

I’ll never forget that morning. A deer wheezed behind me at first light and a partridge landed within 10 feet of my brush blind without detection. It was all very exciting and I probably would have came home with something had I not startled at both encounters and fidgeted less in general, but I made a breakthrough and decided to stick with it, instead of saving up for stands or pop-ups. I spent the remainder of the season doing so and shot my first doe late December from a deadfall on the slope of a ravine. It was an unbelievable feeling and I was hooked from that point on.

Natural blinds are pieces of functional art, sculpted from whatever is available. Should you choose to trim away the interior of a bush, dig a seat into the slope of a ridge, or simply lean against the trunk of a large tree, the beauty of hunting on the ground is in the options. With a little creativity, effective cover is readily available at a moment’s notice. Freedom is the earth-bound hunter’s greatest asset: to move should logic will it; or linger should the heart choose it. Success is where the bow is hung or the pack is dropped.

Still-hunting from natural cover is my passion and I’ll spend the next installment or two discussing how to do so effectively with traditional equipment. For the remainder of this installment, let’s talk about location.

Picking a spot
The bowhunter in me is a romantic and fairly impulsive as such. I hunt for the experience and prefer the mystery of Mother Nature to trail cams, plots, or heavy scouting. Not that I advocate hunting this way, this is simply how I do it. My locations are heavily based on opportunity, wind, and sign and are usually discovered while stump shooting. As has half hazard, as this approach may seem, there is indeed a method to the madness:

Step 2: Find natural cover nearby that will not interfere with the animal’s routine.

Step 3: Assess the terrain and how the wind and thermals will factor into the equation.

The latter is particularly important where I hunt. Michigan is full of wooded ridges and valleys and playing the wind is a frustrating endeavor. Understanding the movement of warming and cooling air is crucial in these areas. For those of you who aren’t familiar: air rises when it warms in the morning, climbing hillsides and ridges and falls when it cools in the evening. Weather and prevailing winds affect both. While this explanation is very basic, understanding it is important when choosing a location, especially on calm days when you’re having trouble judging the direction of the wind. I usually make two or three as a result and rotate between them like someone with multiple stands would.

My favorite places
I tend to prefer deadfalls overlooking funnels or game trails. I’ve always had opportunities from spots like these and my heart beats faster every time I see something recently cut or bowled over by the wind. With a little trimming, the decaying canopy of an old tree makes an exquisite blind. I’ve also pruned out bushes, dug pit blinds in front of large stumps, and have even resorted to stacking a few branches against the trunk of a tree. Anything will work in a pinch as long as you sit still and the outline of your body is distorted.

We’ll talk about the latter in greater detail next month! Until then, good luck, shoot straight, and happy hunting!