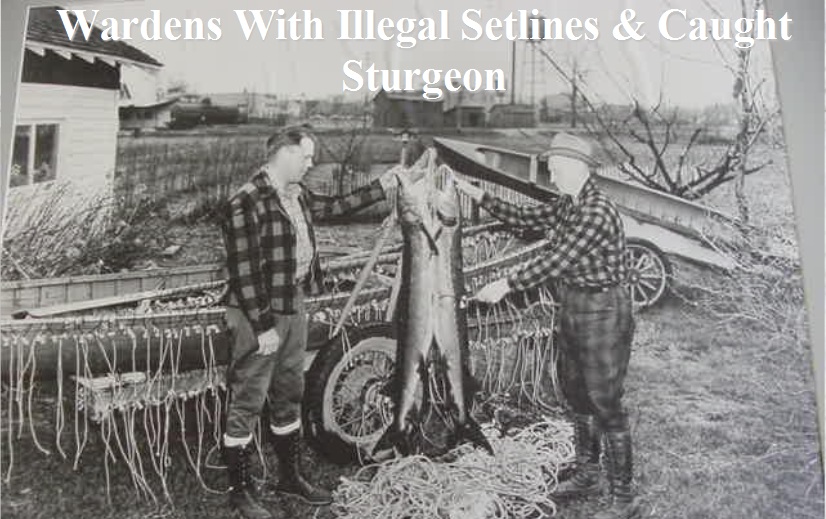 Many moons ago when Wisconsin was first settled, the settlers that took up residence around Lake Winnebago, were either farmers or fishermen.

The fishermen took advantage of the bounty that still, to this day, resides in Lake Winnebago.

In the early 19th century, fishermen became dismayed when they realized their nets were being destroyed by an ancient fish native to the Great Lakes region. The torpedo shaped fish had five rows of bony plates that would easily cut the nets; they were deemed “garbage fish” much like carp is today. The fishermen began to slaughter the bony fish that would get caught and tear the nets by the thousands in an attempt to eradicate these pests.

By the late 19th century however, the climate changed and lake sturgeon were now valued for the taste of their meat and for their caviar. As a result over fishing decimated the sturgeon populations throughout the Great Lakes.

As a source of food, the Winnebago Indian tribe would spear the great fish through the ice and over time, the European settlers would come to know this activity as well.

This is due to the efforts of a Sturgeon for Tomorrow founder who realized one day while he was sitting in an ice shanty as a kid that if he wanted his children and grandchildren to be able to experience this activity, conservation efforts needed to be made.

(A prime example of how hunters and anglers are the true conservationists – not those anti groups.)

In the late 1970’s Bill Casper, one of the founders of Sturgeon for Tomorrow worked diligently to convince the Department of Natural Resources that they indeed could come up with a way to successfully raise sturgeon in fisheries. The DNR was violently opposed to the suggestion. They’d tried the same thing themselves without any success and were feeling a bit put out that a local thought they could do it better. But a lot of phone calls, meetings and pure diligence on the part of Mr. Casper and others within the newly formed organization finally convinced them to work together.

Early attempts to hatch live sturgeon did indeed fail; once a sturgeon egg is fertilized it absorbs water and becomes sticky, enabling it to stick to rocks and debris in fast moving water.

In a lab environment, the eggs would constantly end up sticking together in large clumps and subsequently die. The conservation efforts of the Sturgeon for Tomorrow group made worldwide news. Bill Casper was eventually contacted by a man from Dartmouth who relayed information that a female Russian scientist had discovered a way to successfully hatch sturgeon.

He traveled to the Soviet Union and learned that a simple step was needed in the process.

Rinsing the fertilized sturgeon eggs with red clay dirt removed the sticky substance and allowed the eggs to suspend freely in the water until the eggs hatched.

And thus the first US sturgeon eggs were successfully hatched.

After a growing period of 5 years, live sturgeon were reintroduced into the waters of Lake Winnebago and its surrounding lakes and rivers and to this day some of those same first born sons and daughters swim the great waters.

But the battle wasn’t over.

During the spring months, mature sturgeon migrate out of Lake Winnebago and gather in great groups in the fast moving waters of the Wolf River to spawn.

Man-made structures such as dams have created a limited area for the sturgeon to spawn in, limiting their range which causes them to gather in greater numbers in one area.

Their preference for rock outcroppings on the outside bends of the river make them easy prey for poachers simply looking for an easy meal. But the 54 documented spawning sites also create a danger for more nefarious reasons; illegal fish harvesters specifically targeting females for the expensive caviar which is then exported out of the US. Overseas this caviar can demand up to $3,000 a pound for the black roe.

Once local Wisconsinites found out that this precious resource that they were so proud of was yet again being targeted, the Sturgeon for Tomorrow organization once again stepped up to the plate.

Working hand in hand with the Wisconsin Department of Natural Resources they created the “Lake Winnebago Sturgeon Guard Program”. In the spring of 1988 the program was opened to the public and during the spawning season hundreds of volunteers sign up to stand guard over sturgeon spawning sites. These public volunteers free up DNR resources and allow wardens to patrol non guarded sites (that may not have reported spawning activity), investigate complaints and allow them to complete tagging procedures enabling biologists to track and record data in the future.

The Sturgeon Patrol is initiated and maintained the entire period of spawning, generally April 15-May 5. Active spawning sites are guarded 24 hours a day with 2 person 12 hour shifts.

Funding for the Sturgeon Camp (headquarters) and provisions provided for the guards come from the annual spearing license sales. All dollars created from the spearing season are deposited into a fund dedicated to the maintenance effort for the Lake Winnebago sturgeon population. Annual donations from the Sturgeon for Tomorrow organization go to fund the camp cook; the hat each guard receives, lodging if required and the three square meals provided each day for the guard.

By stationing volunteers at active spawning sites, it deters poachers and illegal fishing.

But the Sturgeon Guard Program was not only created to provide security to the vulnerable fish, it also ensures information gathering is accomplished. DNR Wardens are assigned a station but also “rove” to other stations. DNR Biologists can conduct research and gather information about spawning that will improve the hatchery and ensure these fish that out lived the dinosaurs; survive well into the future.

2 thoughts on “A History of the Wisconsin Lake Sturgeon”