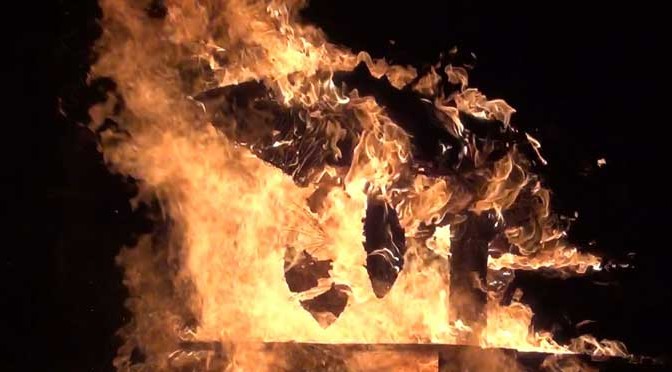 Spending several days with a group of buddies, getting up at the crack of dawn and heading out into the frigid Wisconsin temps to try to kill a really big animal….could be an interchangeable description for either Deer Camp or Sturgeon Camp.

The only differences are that in Sturgeon Camp, you get to sit in a shack with a portable heater and Lake Winnebago is really the only place you can do it.

To cover us, we were joined by Craig Molitor of the Fond du Lac Visitor’s Bureau, Mark Smith, Jim Derosa, Don Dziedzina, Gary Nski and Mark Schramm and were of course assisted by Pat and Roy Kalmerton of Wolfpack Adventures.

The shacks were provided by Wendt’s Marina, completely set up and ready to go, they contained a spear, decoy and ice skimmer for each hole and chairs for each person. They were warmed up and waiting for us by the time we made the slow four and a half mile trek by caravan out to the middle of the lake. “Roads” had been plowed and the remaining snow had been packed down to a whitetop crust from thousands of vehicles driving on them. Navigating a frozen lake as large as Lake Winnebago in the dark looking for a tiny shack among thousands of shacks can be a bit daunting.

Despite the 34” ice depth, the cracks here and there spidering their way into the darkness was enough to give the most hardened spearer pause.

For Julie, Carrie and I, the Red Shack was to be our home for the weekend, a double holed shack; it was plenty big for the three of us to sit comfortably. We settled in and got comfy, setting our decoys at a depth we hoped would lure a trophy sized fish in for a look-see. We sat patiently, drinking hot coffee and munching on Jack Links, watching for that flicker of a shadow.

The water clarity was fantastic as it was the best it’s been in years and opening day was a day of excitement as texts and facebook statuses flew updating everyone on how many fish had been registered and how many were standing in line waiting to register successfully harvested fish. 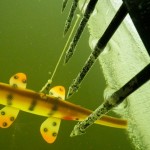 Sturgeon Spearing hours were from 7:00am-1:00pm, all fish had to be at the registration check in no later than 2:00pm. The registration station at Wendt’s on the Lake didn’t finish registering fish until 4:40pm. Between all the check in stations, 42% of the adult Lake Winnebago female harvest cap was completed opening day.

You can imagine the excitement between us all. 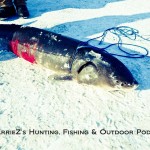 And the disappointment when 1:00pm rolled around and no one in our group had even seen anything!

There were shacks not far from all of us that had speared a sturgeon so we knew they were there.

Saturday night we were treated to a massive bonfire on the ice. Someone had carved a huge sturgeon to burn. 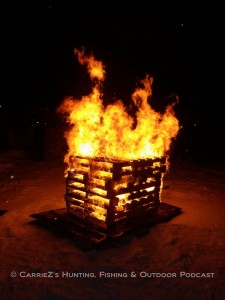 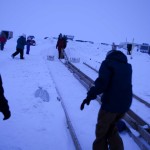 Many of the media participants had fun drinking beer and playing games like ice bowling.

Inside the restaurant at Wendt’s Marina, the walls and ceiling was covered with “Big Sturgeon Contest” entries, over 1200 people paid the $3.00 for an opportunity to get in on the cash winning. 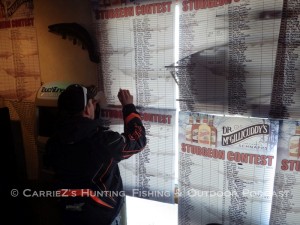 Unfortunately for the second year in a row, the WoW Sturgeon Camp left the weekend empty handed, but you know what they say “Third Time’s a Charm” and it was a good time had by all.