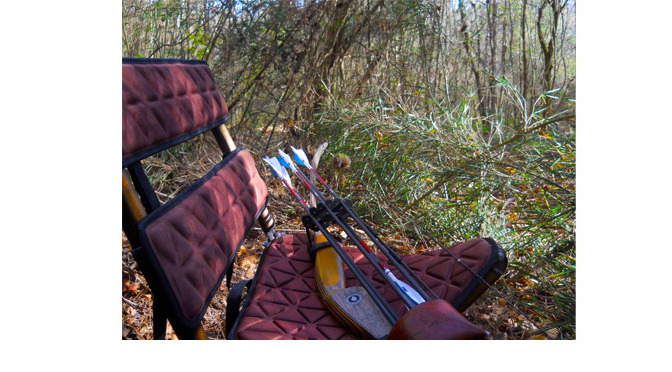 Now that your location has been set, let’s spend some time on blind construction. For starters, I’m not really fond of referring to the way I hunt as hunting out of a “blind” because it isn’t really a “blind” per say. When I think of “blind” I think of something synthetic like a store-bought pop-up. I prefer “enhancing natural cover” to creating a blind. For those who think I’m splitting hairs, you wouldn’t call food plots “baiting” would you? Same difference.

Enhancing natural cover is a far more accurate description for what I do. Every blind I’ve ever made began life as something that was already there: blow downs, tangles, stumps, large trees with felled limbs, river cane, and pits. Deer are used to seeing these things in their habitat, which is a huge advantage. Cover of this sort is also superior to anything synthetic because it provides the kind of depth and shadow that commercial camouflage is attempting to duplicate.

With all that being said, consider this article from Outdoor Life on the vision of the whitetail deer. Pay particular attention to this statement:

“And because deer can’t perceive color shades very well, a hunter wearing camouflage containing many subtle shades of green and/or brown looks just like one big blob to deer. Instead, wear camouflage that breaks up your outline and move as little as possible to avoid being busted.”

Breaking up your human outline should be priority one when creating cover and doing so is extremely easy when working with whatever is available in the wild. I love to hunt from blow-downs in particular. There is nothing quite like hunting from a collapsed leaf-bearing tree, especially when it is a fresh one with the leaves still intact. All you need to do is prune some of the branches out, cut a shooting lane or two, and hunker down inside. If it isn’t large enough, sitting in front of the wreckage can be really effective and won’t interfere with your bow when you draw or the arrow when you shoot. The tricky part of such a setup is getting caught on the draw, but we’ll talk about that in my next installment about “hunter interaction”.

If a blow-down isn’t available where you want it to be, creating one is just as simple. All you need are a few large limbs, some freshly cut brush, and a tree-trunk to lean it all against. I start by leaning my largest limb against the trunk and crossing over others until I create a framework of sorts. I then weave the brush in between to fill in the gaps. Its easy, its effective, and its fun – like building a fort. Who didn’t like building a fort? Sitting in front or behind your newly assembled cover is up to you, but it usually depends on the style of your hunting seat. If I’m using a hang-on seat like a Hammock Seat, I sit in front of cover. If I have a stationary folding seat/stool I can do either, but usually sit in front with a small pile of brush in front of me knee-high to hide unnecessary movement and keep my bow hidden.

A far more creative setup is something I learned from my friend Steve Angell (simplytraditional.net) the first week of November while hunting a piece of Georgia WMA. He found a little grove of oaks, hung netting between four of them in early fall and let it sit awhile while the leaves collected on top. He then propped up the center with an old branch approximately eight-feet long to create one of the coolest most convenient blinds I’ve ever seen. It accommodated my 64” longbow perfectly and I had deer as close as eight yards without detection.

Steve furthered my Georgia bowhunting education by introducing me to the wonderful world of river cane. He’s had great success hunting the stuff and is convinced that deer have a hard time with it. It isn’t hard to see why when you look at a patch. Even when sparse, it is difficult to see through, but it can be shot through fairly easily, which is an advantage. It can also grow fairly high and sticks into the ground easy enough to manipulate as you see fit. The smaller shoots serve as suitable filler should you need it as the ends flower up like cornstalks.

Pit blinds are also very effective and easy to create. All you need is a ridge with a natural dip and a way to dig yourself into it. A friend of mine would bring a roll of carpet and a small emergency spade with him to do just that. He’d dig a trench large enough to sit in comfortably, lay the carpeting in it to keep him off the cold ground, and dig a step for his feet to rest. He would then rake brush around him to break up his outline. He hunted for years with great success out of setups like these before trees were popular. I shot my first deer from a similar blind on the slope of a timber-ridge only I used the trunk of a felled oak for cover and rose to shoot the deer over the top of it when the time came.

Regardless of the kind of blind you build, be sure to clean all noisy material from the forest floor before relaxing into your sit. Planning a few mock draws on passing squirrels or birds will also be beneficial. Your blind is only as good as the way you interact with it.

We’ll talk about that next month. Good luck and shoot straight!

One thought on “Ground Hunting the Natural Way – Part Two”