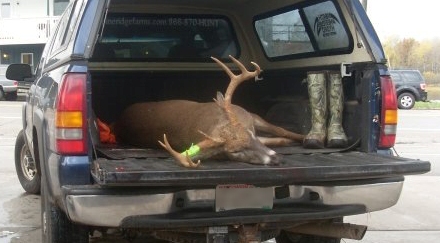 Hello outdoors world!! In this article I would like to talk about the disheartening occurrence that has affected a lot of hunters since the beginning of civilization. The loss of hunting land, and the loss of the traditions that go along with it. Unless you have been one of the lucky few whose family has owned the land that you hunt, you have probably had this happen to you.

I have been fairly lucky over the course of my life. While my family does not own any land to hunt, our family has had a friend that owns a farm in Waushara County Wisconsin. Our Family has been lucky enough to have been able to hunt this land for the past 50+ years. There was a time in the late 80’s and early 90’s that this farmer had decided to lease his land to an out of state hunter. During those years was tough going for our family of die hard deer hunters. We resorted to (gulp) public land hunting, spending a couple seasons hunting the vast public lands of WausharaCounty, and a couple seasons in DoorCounty, hunting NewportState Park. WE have since regained our ability to hunt the land again and all is well and back to the way it should be. My Father, brothers, nephews, nieces and myself grew up hunting this land and we all honed our art in that particular piece of heaven. It feels good to be back.

My favorite time to hunt that farm has always been bow season. Most of my family does not bow hunt. This means I had the whole place to myself. Hunting alone in the woods really gave me a sense of what it takes to be a successful hunter. It taught me a lot of the skills needed, that I could not learn from others. A few years ago, I was walking to my stand. It was the first week of November and peak of the rut here in Wisconsin. I had been watching several nice bucks over the season and really thought it was my night to shine. I dropped my buddy Brian off in a good spot and was only 50 yards from my spot when I heard a grunt in the timber next to me. I froze. One more grunt sounded and I pin pointed its location. It was coming from a guy in a tree 10 yards away! He stopped me and asked what I was doing there. I explained who I was and he kicked me off and threatened me with calling the police. When I had talked to the farmer it turned out it was his son in law and he wanted the land to himself. I was now demoted to the ranks of public land bow hunter. We could still hunt there during rifle season though so it was not too bad.

Decades ago, before I was even alive, much of the land was in the area was not owned. Tracks of land spanning miles were hunted without incident. But now, the land is small. Instead of a plot map that showed large areas of available land, it now looks like a checker board of small forty acre parcels, concentrating all the hunters not lucky enough to have private land, onto small tracks of public. Luckily there was still enough space to go around. Our area has been lucky in that aspect.

During my 20’s I had struck out on my own, away from the traditions of my family deer camp. A few friends of mine were lucky enough to get a good deal on a lease on northern ShawanoCounty. ShawanoCounty has always been one of the top counties in Wisconsin for giant bucks and has been known to have a lot of deer. I got to know a lot of the area there and really started to settle in. While I could not hunt the lease my friends hunted, there were vast areas of land in the area owned by a local lumber company, Tigerton Lumber. Tens of thousands of acres the lumber company owned was open to the public. Thousands of hunters flocked to the area. Many people were born and raised hunting those lands. While it was not private land, it was home to many a deer camp. The bars, restaurants, hotel and other area businesses thrived during deer season. The sheer amount of open land there drew hunters from around the Midwest. It was a sportsman’s paradise to say the least. But that all changed about 10 years ago. Tigerton Lumber closed the doors to public hunting. They decided to do, as many other private land owners have done, lease the hunting rights out. They rolled over for the almighty dollar. This effectively destroyed deer camp for thousands of hunters that could not afford the high price of a lease. My Favorite spot to hunt was actually leased to Deer & Deer Hunting Magazine where they did a project called “Tiger Ridge”. While I lost the ability to hunt that land, as did scores of others, at least that area was being improved and I could still watch it on TV and reminisce, a small cancellation for loosing a prime spot.

After the loss of the public lands I returned to WausharaCounty. Shawano and Waushara are not very far apart. With the number of hunters, equaling to the population of a small city, were kicked off their camps, they all migrated to other open public lands. A lot came to WausharaCounty. The hunter density in the area tripled! It made for really tough going to be a public land hunter. I had a dramatic effect to that area of ShawanoCounty as well. I have heard numerous complaints from farmers there that say since the land closed the deer population has sky rocketed causing massive crop damage. Deer are severely over populated in some areas without the hunters to keep them in check. Subsequently damaging the habitat as well.

The loss of public or available land has been a plague to hunters everywhere. Whether it is land owners wanting the resource for their own use, or bowing to the power of the dollar and leasing their lands to the highest bidder, it has affected a large percentage of hunters, and the generations of traditions that go along with it. The problem is not getting any smaller either. With the rising prices of land and the astronomical costs of most leases, a good hunting experience is almost beyond the reach of most people.

I must give props to organizations such as the Rocky Mountain Elk Foundation. They donate large amounts of money every year to purchase land to open to public hunting, not just in the western part of the country and the Rocky Mountains, but across the country. In Wisconsin, the Dept. of Natural Resources spends millions every year on purchasing land for public recreation and hunting. Unfortunately, they way over pay for the land they buy, costing us tax payers a lot of money. To me though it is worth the DNR over paying, if it gives people more options on were to hunt. Plus it means those lands will not be developed and will stay wild.

It is amazing how much prime hunting land is swallowed up by advancing civilization. I have one deer stand near where I live, that is now a subdivision. I routinely walk down this one street where the few cedar trees in the back yards of a strip of houses that mark what used to be a dense beautiful cedar swamp in which I killed many deer. Now there is a kid’s jungle gym there. Makes me sad every time. But what can we as hunters do? I have one plea. If you are a land owner, make yourself a pledge to keep your land wild. If you want to sell your land, sell it to the public. Go to your state DNR (or your states equivalent), or go to organizations such as Rocky Mountain Elk Foundation. If you pass away and leave the land to your children, and they do not want the land, put a clause in your will to sell it to a party that will open it to the public. There are loads of hunters out there that would love the chance to have more open public lands to hunts. Do the outdoors community a favor and open your lands to the people that will enjoy it. When a friend of mine’s father passed they auctioned off his 120 acres. They divided it into forty acre parcels. The day of the auction i left with a bit of a smile, the WIDNR purchased all the parcels. This meant that even though I could not hunt there as private land anymore, at least it would be open to the public and everyone could still enjoy it as I had for many years. Do not roll over to that dollar and subdivide your land. The loss of our wild spaces is the loss of our heritage, the loss traditions, and the loss of valuable resources that could be enjoyed by all.

Thank you for taking the time to read this article. I would like to wish everyone out there a merry Christmas and happy holidays! I hope your 2014 surpasses your 2013. It has been a great first year here with the “Wild Ones” and I look forward to all the things 2014 will bring us! I would like to thank you all for your readership this past year, it means a lot!