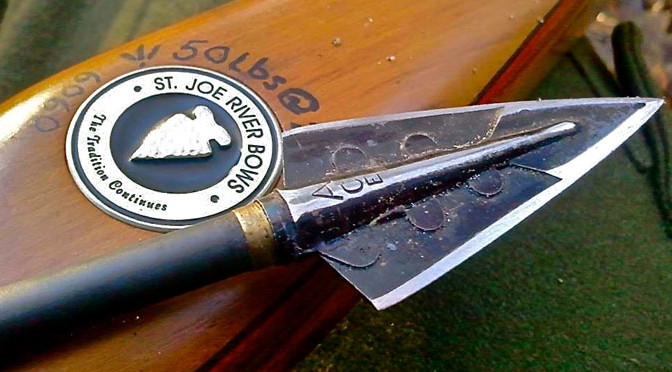 Finally, we get to talk about the business end of the arrow: the part that gets the job done. I must confess I am a broadhead junky. From the moment I bought my first pack, I’ve been infatuated with them. I love what they do; I love the engineering behind them; and I love the way they look. [Tweet “The broadhead is the quintessential symbol of bowhunting.  via @Nick_Viau”]There is no emblem more iconic. When people see a broadhead, they know exactly what it means and exactly what it does, whether they are hunters or not.

An arrow doesn’t seem like an arrow without a broadhead attached. Field points are good and all, but nothing feels as legit as sending razor-sharp missiles downrange. There is something inherently primal about it that makes you want to howl at the moon and sharpen your skinning knife.

No matter where you are or whom you hang out with, “Puttin’ the broadheads on tonight!” can only mean one thing – its hunting season.

To begin, please review this video by Dale Karch of 3 Rivers Archery. He demonstrates this point better than I could ever describe it with words. After doing so, please note the following:

1) From an engineering standpoint, the mechanical broadhead has no business in the traditional world.
I’ve heard numerous mechanical vs. fixed-blade debates rage online, in stores, and in publications, but as far as traditional bowhunting is concerned there is no debate. Anyone who knows anything about bowhunting in the traditional world will tell you that mechanical broadheads and traditional bows do not mix. They require far too much energy to puncture an animal properly. Our bows simply do not generate enough momentum to make up for the loss of energy required on impact.

I had a buddy who was obsessed with arrow flight and claimed he couldn’t achieve it with any fixed-blade traditional head on the market. He’d only recently converted to trad and eventually gravitated back to his favorite mechanical because it flew like his field points. I don’t disagree with the logic, but would be willing to wager his arrows weren’t flying poorly just not as flat as he was used to, and even if they did wobble, it wasn’t anything a little tuning couldn’t fix. He was so transfixed on what the arrow was doing before it got to the target, he was willing to gamble on the aftermath despite our warnings. Not that you could blame him. He had killed dozens of deer with that mechanical out of his compound and hadn’t connected with his recurve yet. There was no way of knowing. Plus, it is in our nature to revert to what is comfortable when we get frustrated with something new.

My friend aside, I’ve heard the “good arrow flight trumps all” argument before and have yet to embrace it fully, especially when you can have your cake and eat it to. All you have to do is tune your bow to a heavier arrow/broadhead combination. It isn’t hard to achieve optimal arrow flight if you experiment., but before you do you must abandon the “speed kills” mentality of the modern bowhunting industry. This isn’t easy to do for most converts.

My buddy was trying to do the impossible: apply compound logic to the traditional bow. They are completely different animals – like comparing Cheetahs to Grizzlies – it can’t be done. A light arrow with a mechanical head will not work on a traditional bow. Forget what you know and embrace the opposite.

2) A sharp cut-on-contact fixed-blade head: whether it is a 2-, 3-, or 4-blade is essential for consistently harvesting big-game animals with a traditional bow.

A broadhead penetrates organic tissue by cutting trough it. The better (or earlier) the blade cuts, the smaller is the frictional resistance and so is the loss of kinetic energy and momentum (directional force). Exceptionally strong game possesses a relatively strong and sinewy skin that reacts with a lot of penetration resistance to blades that don’t cut immediately upon contact. This will decrease the potential penetration. Chisel-point blades are often marketed by their supposedly higher stability against bones. However, game isn’t bagged by destroyed bones, but by a cutting depth that results in profusely bleeding organs. An adequately designed “cut-on-contact” blade will also penetrate bones effortlessly while upholding the arrows energy and momentum significantly longer than a chisel-point broadhead.

While I’m not necessarily a fan of German Kinetics or their broadheads, I am a fan of this paragraph. It illustrates the superiority of a cut-on-contact head over a chisel-point head nicely. The purpose of a broadhead is causing as much hemorrhaging as possible on its way through the body cavity. Cut-on-contact heads immediately start doing so on impact and lose less energy while doing so. They rip, not punch. That is a huge difference.

So…there you have it.

[Tweet “Are you confused yet? Offended? Angry? At the very minimum I hope you’re curious…. “]

Are you confused yet? Offended? Angry? At the very minimum I hope you’re curious…. at least enough to do a little research. I’ve already done mine and know what works for me, but I’m not here to tell you what to do. I want you to mull over what I’ve told you and investigate the points I’ve made. Ask around. Check out the forums. Hit the range. It is all part of the fun.