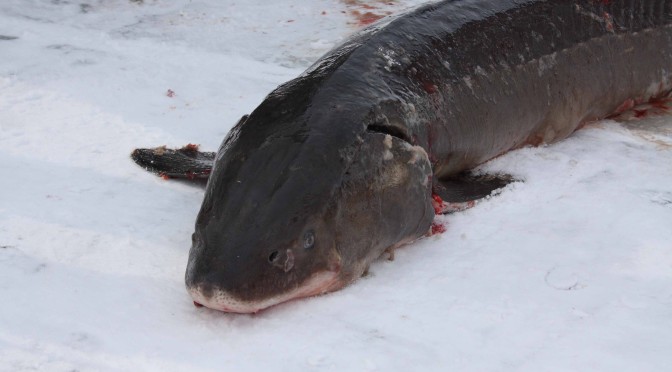 Wisconsin. A state steeped in outdoors heritage and tradition. Generations of hunters and fishermen have taken to the woods and the waters of this great state for many generations, but you would be hard pressed to find a tradition in the outdoors older than the Sturgeon spearing season on the Lake Winnebago chain.

Lake Winnebago is home to the largest self reproducing population of lake sturgeon in the world. These giants of the lake live for well over 100 years and reach sizes of over 200 pounds!

In ancient times, Native American tribes in the region would huddle over holes in the ice every winter in hopes of spearing some of these behemoths, which provided lots of meat for their families. When Europeans settled the area they regarded the sturgeon as a garbage fish. They would ruin their nets that they cast for smaller fish so they began to slaughter these giants trying to rid the waters of this “pest” of a fish.

Then along came the caviar trade. Along with their meat, their caviar was prized around the world as some of the best. That threatened the species in a whole new way. Over harvest of the species soon began to be a problem and their numbers plummeted.

By the turn of the century, regulations were starting to be established to control over harvest. Size and bag limits where instituted. It wasn’t however until the 1940’s that real concern was placed on the sturgeon.

It is because of modern sportsmen and anglers that the lake sturgeon population is what it is today. With a well regulated, controlled harvest, the Winnebago chain now holds the best breeding population of lake sturgeon in the world! With population estimates exceeding 40,000 fish and growing, this annual tradition will be around for many more generations to come!

I grew up on the north shore of lake Winnebago in a town called Menasha. Every year on opening weekend I would venture to Waverly beach, a local bar and eatery that housed one of the sturgeon registration stations, strategically placed around the lake, to watch the days catch be brought to shore. As a young pup, these giants looked even bigger! I would gaze in wonder as fish twice the size of me were hoisted up the the scales. As a kid who loved to fish, it was truly a wonder to behold.

When I got old enough to venture around by myself I would make a point to go around to different cities around the lake to watch the harvest roll in. According to regulations, a harvested sturgeon has to be registered at one of the WIDNR sturgeon registration stations before being allowed to leave the area. There is no call in registry and unregistered fish cannot leave the preset boundaries surrounding the lake. With that reason, all fish must go through the stations, which makes them prime spots to go watch the fish being brought in by the anglers.

Most stations are set up at bars or restaurants that encompass the lake. People gather at these spots all day long and it becomes a very festive atmosphere for spearers and onlookers alike.

Though growing up watching this annual event, I have always remained a spectator. Watching from the sidelines as happy anglers bring in their catch. But not this year. This year will be the first time in my 40 some odd years that I will be taking part in the annual harvest. I thought long and hard about where I wanted my first season to take place. I decided on the Fond du Lac area, on Winnebago’s south shore would be a good place for me. Not because it holds more or bigger fish, actually your odds are about the same no matter what side of the lake you spear. My reasoning is the fun activities that the Fond du Lac area has going on.

Parties and festivities dot the lake on all sides and it really has an almost holiday like spirit to the season. Live bands and beer tents speckle the lake as you travel around it. If there is a registration station, there is a party. The Fond du Lac area has been at the forefront of good times when it comes to the annual sturgeon season. Many events have been established coinciding with the season. From dawn till dusk, and well after, there is something new and exciting going on in the area. Many local Fond du Lac business have even jumped on the band wagon to offer up something special for the season.

The highlight in the Fond du Lac area for me is the bonfire on the ice with the burning of the sacrificial sturgeon. Located behind a huge beer tent, people huddle around a roaring bonfire on the ice. When, and if, you actually get cold next to the roaring fire, you can step into the heated tent where you can hear some pretty kick ass live music and pound back a few beers, or in my case Pepsi, and enjoy the night.

Seeing as I live on the north shore I could save my time and money by going out a couple miles away from my house, but it is that extra something special that Fond du Lac has to offer that makes me want to go there for my first time. It’s more than the spearing. It’s more than the harvest. It’s just a really good time. And if you can’t have fun why do it? Right?

The ice conditions on Winnebago this year have been down right awesome! With a clear and solid 15-20 inches of ice being the average around the lake, it looks relatively safe. Ice thickness is what keeps us safe out there, but water clarity is what makes us successful. With most spearing action taking place in anywhere from 8-15 feet of water, and a main basin that reaches over 20 feet, water clarity is a big factor. No matter how big the fish is, if you can’t see it, you can’t spear it. This year is turning out to be an above average year for clarity. With reported visibilities from 8-12 feet and even better in some locations, spearers should have great visibility though the season, greatly improving odds of seeing a fish.

The season is not set in length like most hunting and fishing season. The season opener this year will be on Saturday February 11th and run for 2 weeks or until the harvest cap is met. The harvest cap is in place to avoid over harvest of the species. All that need to happen is one of the 3 cap categories need to be reached. This year harvest caps are as follows; 344 juvenile females 855 adult females and 976 males. Once 1 of these goals is met, the season closes the following day. Even if it happens on opening day. Regulations such as this insures that sturgeon will be plentiful for years to come and the season will go on. Most years the season runs most or all of the time allotted. Years With good water clarity usually have shorter seasons and higher success rates.

In closing I would like to wish all those taking part in the sturgeon spearing season a safe and successful time on the ice. Remember the ice is never 100% safe out there so be careful. And if you aren’t spearing but want to check out what it is all about, meet me in Fondy! Or good time on the ice will be guaranteed for all!