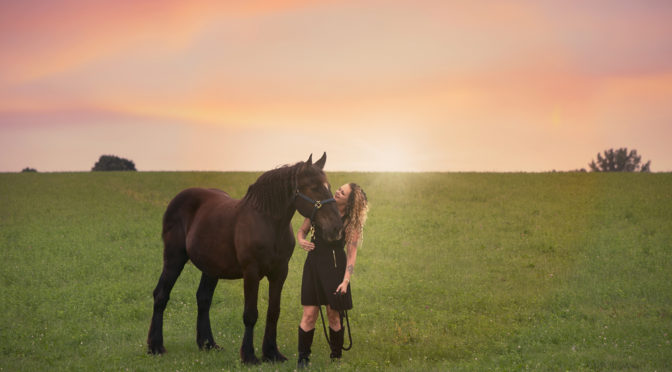 It was the day I officially became a horse owner.

Growing up I was OBSESSED with the Black Stallion. As a young girl I devoured those stories. Time and again Walter Farley transported me to islands and racetracks and faraway stables.


In October of 1998, after completing my four years of service, I was honorably discharged from the US Navy, at the ripe old age of 20 I came home, not sure of my place in the world and had a trouble transitioning back to civilian life. I was introduced to my mom’s new boyfriend who had horses. Over time I began helping them with stable chores and learning more about horses in general. Growing up a city girl I never in a million years thought I’d have so much exposure to horses much less be able to have one my very own. I enjoyed the work and decided if I was going to be doing the work, I wanted a horse of my own.

That spring we looked at a few that were for sale in the area, I rode a handful but none of them were quite right for me.

Fast forward to August 3, 1999, walking through the draft horse barn at the Wisconsin State Fair, a six-month-old black Percheron, all legs and head, with this frizzy wild mane that stuck up in every direction, nudged me as I was walking past, proceeded to shove his nose in my hair, allowed me to throw my arms around his neck and I said: “THIS ONE.”

Originally the backbone of our Spotted Draft Horse breeding program, we had big plans for my medieval theme park (THAT is a story for another day) that would of course need sturdy jousting horses.

Unfortunately, Champ was a bastard as a stallion, he was mean and unruly and not a fun horse to be around. After we lost the funding for the park, my life went in a completely different direction and I decided to geld him.

Luckily, Champ is not a bastard as a gelding. Quite the opposite, he’s been my rock for almost two decades and would be happier in life only as a lapdog.

He’s taught me many lessons along the way, and I don’t know too many people who still have the same horse twenty years later.

In celebration of our 20th anniversary I hired a photographer to document this joyous occasion.