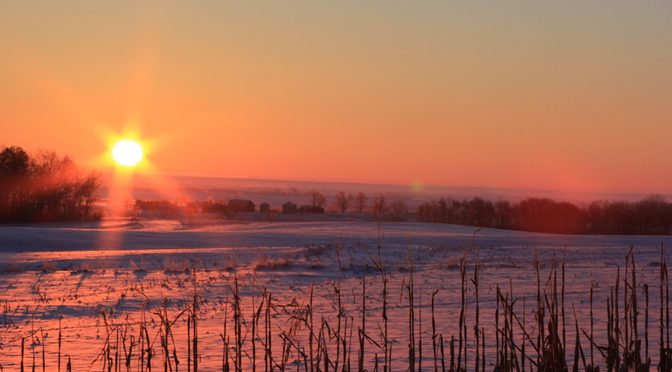 In a world where everything is based on bigger, faster, better, more, right now – remembering to spend time with a loved one can be hard.

As a writer/podcaster/blogger/photographer I run at a hundred miles per hour every second of the day and thus my actual days in the field are few and far between. Quite often, I get wrapped up in the business side of things and forget how precious making memories can be.

Opening weekend of the 2015 Illinois firearm season reminded me of that very fact.

I credit my dad, Bob Harrison for igniting a passion for the outdoors, but as I grew older our time together hunting the Wisconsin woodlands became less and less. I began hunting alone for the sheer convenience of it and our father/daughter hunts grew even sparser.

On a frigid Sunday evening in November, thirty minutes before shooting time ended, my dad took a buck with his muzzleloader and the excitement on his face reminded me of days gone by when I was young and had unlimited free weekends to hunt with him.

Besides my dad and I – the only Wisconsin hunters, Deer Camp at included hunters from all over the country and there was no shortage of camaraderie. Unsure of what to expect I was pleasantly surprised at how easily I fit in with them. The weekend was filled with stories, laughter, and lots of deer and turkey hunting talk.

Friday morning dawned cold, my dad sat in a blind in an adjoining field, and I watched the sunrise in eager anticipation. For almost an hour I listened as an irritated boss hen in one tract of forest scolded another hen from across the field. I had two young does step out within thirty yards of me, high stepping as their hooves made contact with the frost-laden grass. And then spent the day watching does and bucks wander everywhere in the field except within range.

We lost most of Saturday to Winter Storm Bella, but sitting around, waiting the storm out was as enjoyable as any part of the weekend. Eventually Bella blew out and we went out for an evening sit, braving the snowdrifts and wind.

It was almost the end of the night when the classic eight pointer stepped out. I ranged him at 113 yards, raised the muzzleloader to my shoulder, took my time to settle the scope and pulled the trigger.

One of the other hunters had been sitting on the far side of the field and later back at camp, he stated after he heard the shot, he saw a big buck walk out onto the field and lay down.

That of course planted the seed of doubt in my mind. What if I hadn’t missed?

After dinner, we went to look for my “maybe” buck. But it was not meant to be. I went to bed that night beating myself up for missing an outstanding deer.

The sunrise after a snowstorm is always a delightful treat. Despite it being only nine degrees Sunday morning, the snow sparkled with magic as the sun came up and I waited in breathless anticipation for the deer to make an appearance.

But that day the deer stayed hidden. Waiting out the cold and snow, they did not make an appearance until later that evening.

They call it the “magic time”; that half hour or so before the sun sets, when deer are like ghosts; walking silently through the snow, appearing seemingly out of thin air.

We were treated to quite the show as an eight-point buck clashed with a four pointer trying to steal the half dozen does feeding about three hundred yards away from us.

As I the sun steadily sank, I watched in amusement: these deer seemed to be as enchanted with the evening as I was, they appeared and disappeared, running and chasing back and forth.

Busily watching them through my binoculars I jumped when I heard my dad whisper “deer!”

I looked over and sure enough, there was a five-point buck feeding on the last few stalks of standing corn.

I ranged him at 105 yards and let my dad know he could take the shot if he wanted to, or wait to see what else showed up.

He barely hesitated as he lifted his muzzleloader and took the shot. The deer sank into the snow as silently as he’d appeared.

I will never forget the ear-to-ear grin on my dad’s face.

Despite the fact that I didn’t even get a deer, this was one of the best weekends I’d had hunting in many years.

As women, we don’t need our dads to take us hunting. We don’t need a man to show us the ropes or to help us figure things out.

The fact of the matter is that we wanted to hunt with these men in our lives.

Because making memories, whether you’re male or female, is what Deer Camp is truly all about.