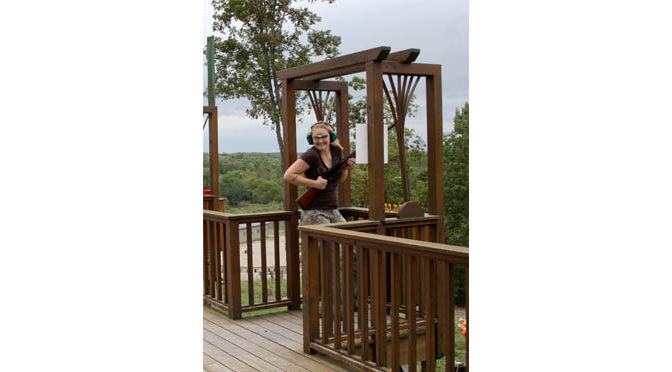 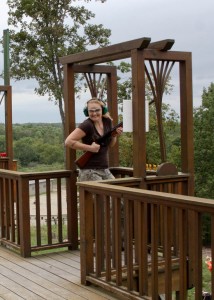 When I received the invitation to participate in the 2012 Sporting Clays Classic at Milford Hills Hunt Club to benefit the Boy Scouts of America, I was pretty excited.

I’d never really participated on a shooting clays event before and was eager to give it a shot.

I picked up a co-worker from a Park N Ride we arrived at Milford Hills promptly at 11am.  We registered with the volunteers and waited for the rest of our team to get there.

My employer’s benefit administrator was a Star Sponsor and Benefit Services Group had graciously extended the invitation to us.  Putting a face to an email address was great and Melanie and I were very excited to have been included.

Milford Hills Hunt Club was where “Campfire Segment” I was in for the Deer Hunt 2011 with Dan Small was filmed.  That was a fun experience and seeing the huge stone fireplace dominating the main hall brought back memories.

The event was rather well organized.  Each team received a clipboard with a map, detailed instructions and a scoring card.

A traditional Wisconsin lunch of brats and hotdogs was enjoyed while the organizers went through safety concerns and general rules of conduct; I put in my twenty dollars for the chance to win a Mossberg 20 gauge shotgun.

The teams were each assigned a staggered starting point at a different station.  There were a total of 12 stations, with varying 6 or 8 shots with no more than two shells loaded at any time.

Sporting Clays is one of three major discipline of competitive shooting.  Clay pigeons launched into the air are then shot with a shotgun.

Trap Shooting – trapshooting requires the use of a trap house which holds a machine that will mechanically “throw” a clay pigeon into the air.  The shooter stands behind the house at a “station”.  With five stations 16 yards from the house a shooter will shoot at a clay pigeon launched at random angles at each station.

Skeet Shooting – very similar to trap except you have up to 8 stations, 21 yards from the house.  Skeet was intended to imitate bird hunting. 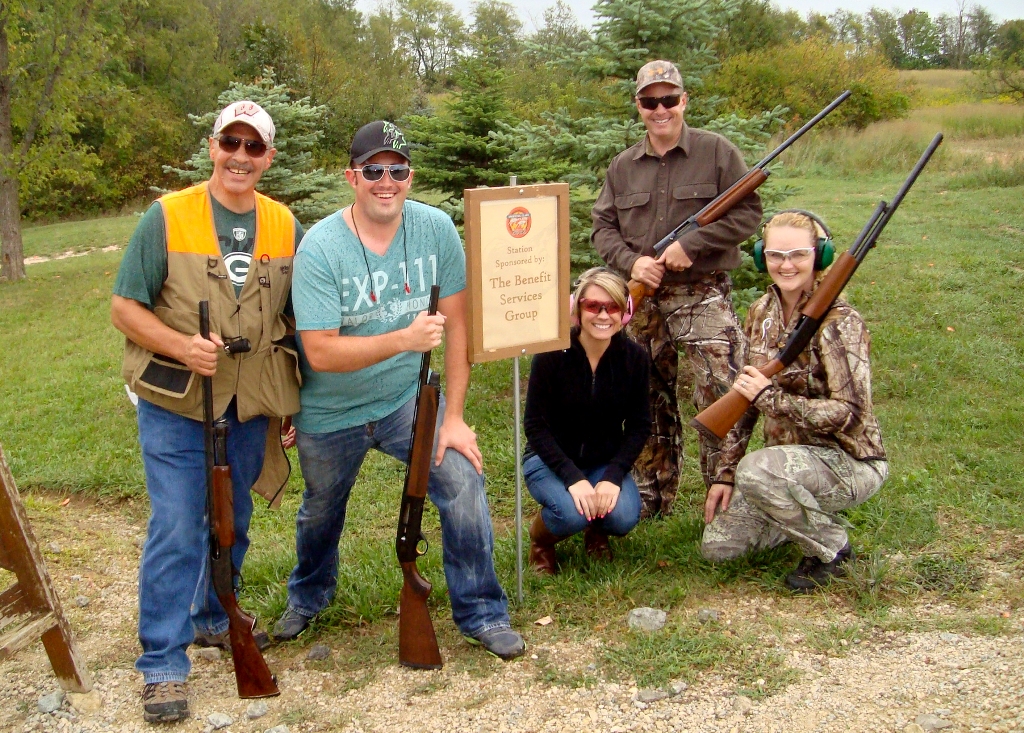 Sporting Clays aka Golf with a Shotgun – 10-15 different shooting stations laid out over natural terrain.  Unlike trap and skeet which generally are somewhat predictable, shooting clays encompass a variety of angles, trajectories, speeds, target sizes and distances.  They can be thrown in pairs within seconds of each other or one right after another.

At 1 o’clock we headed out to our assigned starting point – Number 11.

We shot station 11 & 12, getting the feel for what was going on and for Melanie to learn how to load, aim and shoot my shotgun, and then it was time for the “Cluster Flush”.

Each team was to shoot a 60 bird flurry at the 5 person stand.  It was all the more challenging because the flurries are never the same; they change angle, trajectory and target type.

Melanie was using one of our shotguns, she’d never shot one before and this was a feet first introduction to shooting clay birds out of the sky.  But since we only had 4 shotguns and 5 team members, she decided to “shoot” the camera instead.

I was pretty impressed with how she handled the shotgun.  Knowing that she would not have any eye and ear protection I of course grabbed my Radians.  I even let her wear the pink ones.

Chris, Brian and John were a blast as team members, and everyone shot well.

Lady Nature was finicky that day and by the time we were able to shoot the 7th station it was raining on us.

The awards reception with hors d’oeuvres and cocktails was scheduled for 3:30 but by 3:00 the club was urging us to hurry up and finish.  Truth be told, after firing our shotguns 50+ times a piece  that and being cold in the rain, I don’t think anyone was too upset about it.

Alas, I didn’t win the shotgun but the hors d’oeuvres were phenomenal.  They had a spread that was more like dinner than appetizers complete with a pheasant barbeque.

The event was for a good cause, a lot of people won some great raffle items, and I thoroughly enjoyed hanging out with some new found shooting partners.

The day before the event I called because someone had made the statement that the club provided ammunition.  So I called Milford Hills to confirm.  I was placed on hold while someone checked the event details and I was told “No, you have to provide your own ammunition.”  So off to Cabela’s I went and picked up 8 boxes of target load 20 gauge shells.

Imagine my surprise when we checked in and I found out that we actually were provided the ammunition.

So now I have an extra 200+ Estate Cartridge Inc. Super Sport Shotshells sitting in my basement.

What to do with them?